bulgaria December 6, 2020 bulgaria Comments Off on When Johnny Velinov scored for CSKA and Georgi Iliev kissed his shoe

An autobiographical book by the legendary Bulgarian goalkeeper Georgi Velinov will be published soon. It’s called “My Story” and it was written by longtime sports journalist Nikolai Alexandrov.

The book, which collected the story of a famous goalkeeper in 328 pages, is due to be released on December 10 at a price of 18 BGN. Besides football, “My Story” tells about Johnny’s unusual life, unfortunately accompanied by many obstacles in life.

Five days in a row TOP SPORTS will present you parts of the work. Today it is the turn of the second fragment.

On the evening of December 2, 1981, the sports program of the first program, at the end of “Around the World and in Bulgaria”, quickly aired two short reports of football matches. CSKA fans remember that their team’s 1/32 final stage match in the Soviet Army Cup tournament against “Chepinets” (Velingrad) showed only a few of the nine goals scored by the army. This is a perfectly normal exercise for those years, people weren’t even very upset, but also how to score everything interesting in a game that ended at 9: 1? never the goal of CSKA goalkeeper Georgi Velinov. 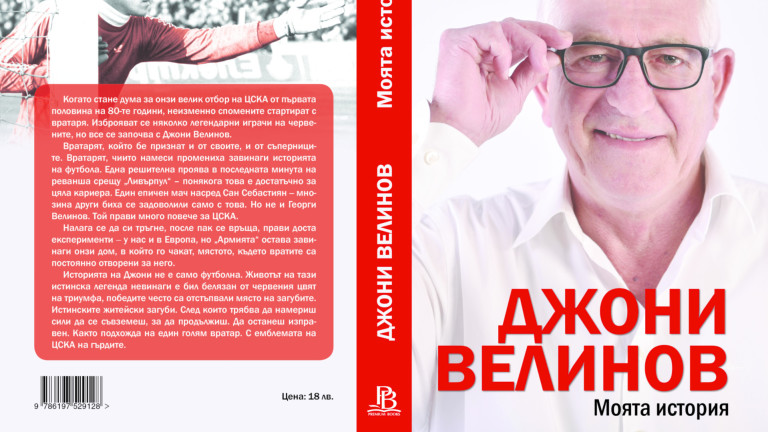 “I don’t remember exactly what goal it was. I think it’s four to zero, something like that … The ball is at my feet, I go a few steps outside the penalty area, I look – um, no one is meeting me. hear Jackie shout at me, “Give it to me! “Yes, yes, I can’t possibly give it to you” – I answer him. strong jerk – the ball flew over the field, I see my colleague running back to his door, but she hit in front of him, jumped over him and hop – go to the net! Target! Unique! Gosho Iliev starts kissing my left shoe, but a little on. We joked about it. Later, a few months later, someone somewhere told me that this goal was in the Guinness Book of Records. Only Pantelic and I had scored such a goal. But I don’t know, neither I nor the Guinness Book of World Records. I have not seen anything, this goal remained a curiosity, the fans told legends about it. not from a penalty or a foul, not at the end of matches, when losing teams often call their keepers to help in the opposition’s penalty area, so by scoring this goal I finally felt this is my year.

A few days later is the ceremony for football player в „- 1 of Bulgaria. Far from the subsequent brilliance that accompanied these ceremonies during the golden generation of the first half of the 1990s. In the corresponding year 1981, the “celebration”, which continued after the important awards ceremony in a friendly banquet, was held in the cult restaurant above sector B of the “Vasil Levski” station – “Pri bai Gosho”. The place is next to the editorial office of the newspaper “Start”, who was then the initiator of the investigation. It has been a kind of center of the football community for years – under Bai Gosho, players, coaches, activists, journalists and supporters come together to eat and drink. Everything takes place in a pleasant atmosphere.

Georgi Velinov – goalkeeper of CSKA “Septemvriysko zname” became a footballer of Bulgaria in 1981. Second in the rankings remains his teammate and friend Georgi Dimitrov – Jackie, third is Georgi Slavkov – then from “Trakia” (Plovdiv). The year of the “Three Georgievtsi” has long been one of the best for Bulgarian club football. Another thing is impressive – for the first time in ten years, a winner в „- 1 becomes a player of CSKA! The fact is, oddly, in the past decade, given that half the time – there are five titles for the reds, there’s no worthy representative of them for the top spot. Three second places in the poll – for Bozhil Kolev, one – for Tsonyo Vassilev – really strange, given that the military is a hegemony for this period. Well, at least in the next few years, really in the next decade, inevitably because of the crazy European successes, things are somewhat balanced. “

His autobiography will be released soon