The movie "Aga" with the big prize "heart" in Sarajevo, shot at -40 ° in Siberia 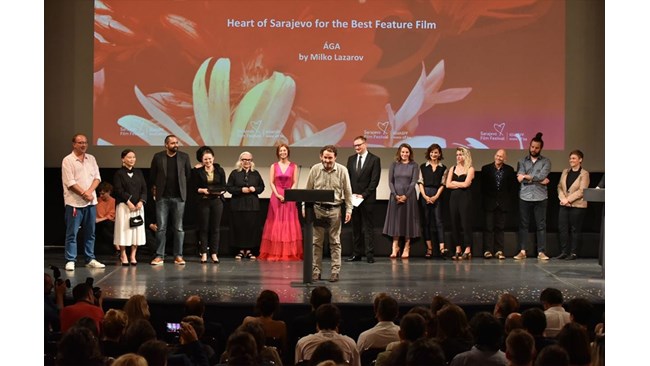 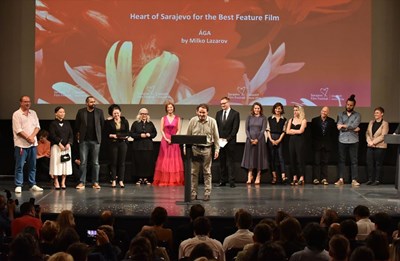 The Aga team during the ceremony in Sarajevo – the director Milko Lazarov.

The Bulgarian premiere is on December 14th

At minus 30-40 degrees deep in the heart of Siberia, the film "Aga" (the emphasis is on the first syllable, because it is the name of a girl – bg) who came back days ago with "The Heart of Sarajevo" – the prize for the best film at the prestigious festival. But not the climatic problems have impressed the jury, and the soft universal human story of inequality between generations, which is increasingly becoming global, is convinced by critics and viewers. Although the band opened the 22nd Sofia Film Fest in March, it is the official premiere for the Bulgarian public on 14 December.

Presented as a project with the working title "Nanook" at the "Sofia Meetings" in 2014, where he received the awards from the Mediterranean Film Institute and Synchro Film, Video & Audio, Vienna, the Aga film continued its triumph in Sarajevo with the big prize for the best movie "The Heart of Sarajevo".

The premiere of "Aga" was in the main match in February (outside the competition – this is a breakthrough of Bulgaria in 29 years when there is a band from Ivan Nikhev) as a cover-up film at the Berlinale, where he was rated as

from the land of

in which Sedda and Nanuk mourn quietly and gallantly for their only daughter, Aga. The story is dedicated to the way in which the modern world changes the relationships between people.

Milk Lazarov & # 39; s debut film "Alienation" was also part of the Sofia Meetings program and was selected for the premiere performance of the oldest festival in the world: the Venice.

In Sarajevo Aga competed with nine other films in the main competition. Chairman of the jury was the Iranian writer and director Asgar Farhadi. Together with the price, the prize also raises 16,000 euros. Director Milko Lazarov said they were invited by several festivals.

Milko Lazarov and Simeon Ventsislavov are authors of the Aga scenario, which in 2015, in competition with ten other projects from seven Eastern European countries, received the prestigious Krzysztof Keslovski award at ScriptEast in Cannes for a scenario from Eastern and Central Europe.

Previously, Aga won two Sofia Meetings 2014 awards, where producers could get the project as a partner, Guillaume de Sey, Arizona Productions. Producer of "Aga" is Veselka Kiriakova, who has worked with Milko Lazarov since his first film "Alienation". The cast is international. Cinematographer of the film is Kaloyan Bozhilov. "Aga" is an important Bulgarian co-production with Germany and France.

The story of the Bulgarian-German-French co-production brings viewers to the Inuit (a group of Eskimo countries) yesterday among the snow-covered fields of the North to tell a story about the clash of civilizations by the prism of love and human relations .