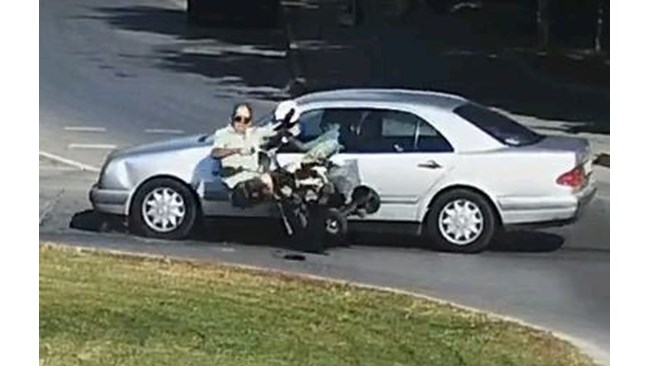 – Camera recording of a crash caused by Radev-senior, where all institutions in Bulgaria are burned

– On August 17, the 81-year-old parent participates in an incident that is not registered with the Traffic Police and the Public Prosecution Service

– On behalf of Rumen Radev, his press center rejected the suspicions of pressure to disguise the crash

– Fallen was first victim of the battle, but after a re-analysis of camera images on Saturday, the boss of the head of state

– The chief prosecutor and the Minister of the Interior ordered inspections

Perhaps at the only roundabout in Harmanli on Friday, August 17, at 9.30 am, the father of President Rumen Radev does not stop the sign and meets the disabled Stefcho Todorov. The crash is light, but

There is no rule in the MoI bulletin, just like the practice of traffic accidents. The impact of the roundabout in Harmanli was also not reported to the public prosecutor.

Typically, in similar situations with famous Bulgarians or their relatives, the news appears in minutes and hours, and in this case it remains "hidden" in the Harmanli police for 8 days.

The site breaking.bg has released the news and clip with frames from the crash, so

so that the name of Georgi Radev is not involved. Here also appeared the name of the former mayor of Harmanli Mihail Liskov, who today is the leader of BSP in the municipality. He sat a few minutes after the crash between the Mercedes and the tricycle on the fatal intersection in the city.

"24 hours" searched on Saturday for all actors in this story. The presidency first refused to comment and then categorically rejected the anonymous claim of pressure, with which he indirectly confirmed the information of the head of the team.

Sources of the Ministry of the Interior unofficially confirmed that a crash had been caused by the father of Rumen Radev, and it was later realized that

there is also doubt

The Interior Ministry explained that, by law, light personal injury in a car accident is not a crime. A wheelchair was only allowed to drive on the road if there were no sidewalks.

After the media began to check the details in this story, the clip that has now disappeared on social networks was viewed by experts. They discovered that the debt is still with Georgi Radev, not with Stefcho Todorov.

Otherwise, the story is as follows:

Before the crash on Saturday morning the site reported breaking.bg.

On 17 August, on Friday, the father of the president, who prefers to enter the intersection, touches the tricycle with disabled people. According to the record, Georgi Radev does not leave the car. There are police and unidentified two civilians. The former mayor and current leader of BSP in Harmanli Michail Liskov is coming.

They all speak by phone without including the crash data, as is usual with traffic police. The ambulance arrives, put the injured on the stretcher and take him to the nearest hospital. Georgi Radev is apparently invited to leave the Mercedes, after which a short conversation between him and the police takes place. They later help him to leave with the car that caused the crash.

After 24 hours of comments from the Ministry of Interior, the head of the State Office for Refugees – Haskovo, former Commissioner Angel Tzankov announced that the inspection of the Ministry of the Interior and the National Police an internal control on the question whether information from the Harmanli – Georgi Radev – the father of Bulgarian President Rumen Radev.

"The case is from the previous Friday and he arrived at the roundabout in Harmanli." The incident was reported, "Tsankov said Georgi Radev ruled the Mercedes It was with him that his 78-year-old wife Stanka drove with him They live in the nearby village of Slavyanovo, and at the roundabout the older driver hit an electric tricycle with an invalid.

According to official information, the injured man did not suffer seriously. He was slightly ill. The Ministry of the Interior reported that there are currently two inspections underway – for the fault of the accident and whether it has acted in accordance with the rules. The history clip has been removed and then restored to social networks.

The Presidency initially refused to comment. "These are speculations, there is no pressure on law enforcement agencies by the presidential institution," said Kiril Atanassov, acting secretary for relations with the head of state's media, later. These were the malicious words the presidency said without denying the incident. (What was the reaction of the President, who was on the jubilee celebration of the Shipka Epic – see below)

Later it became clear that the victim was named Stefcho Todorov in the incident.

Every day I go home on the roundabout. I know old George, I saw him worried about the fallen tricycle, so they dare to see what's going on and help. I went home because my mother was very sick and died a few hours later that day. & # 39;

That is what Mikhail Liskov said on Saturday. "Today (Saturday – Friday) I gave birth to my mother nine days after my death, while someone is looking for a calf How do you think I can influence the police? This is not serious," Liskov said , claiming that his appearance was an attempt to influence uniforms.

The media without access to the president of Shipka

His press secretariat: it is not

press the Ministry of the Interior

President Rumen Radev left the information about the accident of his father Georgi Radev without comment. After celebrations for the 141th anniversary of the Shipyan Epopee, including the head of state, he did not have the opportunity to answer journalistic questions.

The presidential press service also did not deny or confirm the incident.

They are, however, firmly convinced that the presidency has not put pressure on the Ministry of the Interior.

"This is speculation, there is no pressure on law enforcement agencies by the presidential institution," was the hateful comment of Kiril Atanassov, who acted as the secretary of the media relations of the head of state.

Rumyana Arnaudova, spokesperson for the chief prosecutor: Tsatsarov appointed a check, the incident was not reported

Chief prosecutor Sotir Tsatsarov appointed a check with 2 parts of the crash with the father of President Rumen Radev, his spokeswoman Rumyana Arnaudova announced exclusively for "24 hours".

The incident was not reported to the public prosecutor of the Harmanli district, although it was more than 7 days ago, she said. That is why the chief prosecutor has had the prosecutor carry out an inspection of the District prosecutor's office in Haskovo. The Deputy Head of the Prosecutor in Haskovo Darina Slavova travels to the place, appoint Arnaudova prosecutor.

The check will be in 2 directions. The first is whether there is a transport crime. For the time being, data from the Ministry of the Interior show that Georgi Radev, who was struck by Stefcho Todorov, suffered a slight physical injury after the Mercedes of the president's father hit his wheelchair in Harmanli. However, he has visited a hospital where X-ray photos have taken him. The Public Prosecution Service takes over the complete medical files and if Todorov appears to have an average physical injury, a preliminary investigation will be carried out for the accident. The photos themselves are handed over to a forensic doctor who will then assess the victim. There will be interviews with both the father of the president and Stefcho Todorov, Arnaudova said.

The second direction of the inspection is for the actions of the MoI officials. Check how they got the signal. The recording of the camera is confiscated, video expertise has been assigned. There will also be automotive expertise on the Mercedes and the tricycle.

Minister of Internal Affairs Valentin Radev has also appointed 2 inspections assigned to the Directorate-General National Police and the Inspectorate of the Ministry of the Interior.

Prime Minister: I am not known, there is someone to investigate

"I am not familiar with the subject, not reported to me, I knew neither the facts nor the circumstances." Yesterday Prime Minister Boyko Borisov said a remark about the incident.

"On Saturday afternoon I want to show Perperikon what has been done, I want to show ministers, instead of baking on the beach, and with the mayors what we build for their children." I do not agree with the words that the frameworks from GEDB, this is a return to an old rhetoric, and we have used similarly, especially from the head of state, should not be done, if he wants, if he wants to do it, "he continued, apparently referring to the clashing battles between the presidency and the Council of Ministers weeks ago. And in this context he referred to Rumen Radev the ball for incidents involving amateur aircraft.

"He can not attack us and wash us for nothing," the prime minister went through in the head of the state. And with regard to the car raid with Radev – the senior concluded: "There is an inspection in the Ministry of the Interior, there are people to investigate, I do not want to waste my energy on such small intrigues. talk. & # 39;

"Doctors and experts have to say when the indicators that are initially required in performing an aptitude test, the way in which the examinations are to be performed and the age at which they begin to deteriorate, commented on" 24 hours "the head of the parliamentary transport committee, Khalil Letyfov.

The elderly have the highest percentage of accident premiums. But young drivers see more disasters despite their good health due to other factors, he said. So any restriction must be motivated by facts and evidence, "not to cause inconvenience to suitable drivers who have advanced only in the age." The debate is already in society, it will also come in the transport committee, assured her boss.

"I suspect that the first or second week in the BIC will discuss the issue with the minister and we will decide which direction to go," he added.