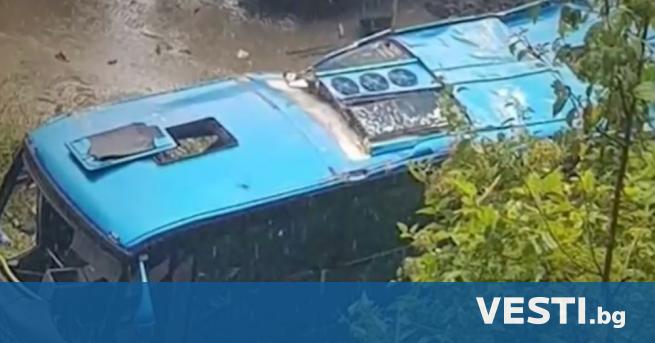 "15 ambulances arrived on time and carried the wounded, all tests were carried out, the necessary drugs were provided and the blood was needed for all groups, so as not to end up in a critical situation."

This said Minister of Health Kiril Ananiev during the briefing after the emergency meeting of the institutions in the Council of Ministers.

"21 people were injured, six women were housed in Pirogov, four of whom are in poor condition, two of them are in extremely bad shape, they are intubated and breathing artificially," Ananiev said.

See also the video below, also from his statement.

The child who traveled in the bus that was overwhelmed by Svoge is one of the dead. It is 13 years old and comes from Svetovrachene. His grandmother is also dead. This confirmed for NOVA the mayor of the village of Svetla Nikolova.

That is where most people traveling by bus leave for a trip on a Saturday morning.

The victims, the wounded

There were 34 people with the driver in the bus. The victims died 16 – 13 people, and two died on their way to Pirogov. A woman died after being admitted to a hospital in Svoge. 27 wounded and 21 were transported to the hospital. This was announced by Interior Minister Valentin Radev. Among them there are people from the cars that are involved in the crash.

The Ministry of Health sent the media detailed information about the state of the victims of the crash in the Iskar Gorge.

The MoI in turn opens the telephone line, where relatives of the victims can get more information – 02 982 50 39.

What about the victims?

• UMHALSM "NI Pirogov" – eight victims were transported to the hospital. One died during transport. The second one died when he was taken to hospital because of a condition that was incompatible with life. The condition of the hospitalized patients is:

• UMHAT "St. Anna" – six victims, of which five are women and one man:

– 59-year-old man with initials GG – with multiple abrasions and wounds in the body and head area, with a como. The patient is aware and remains in the active care institution for active supervision.

The teams in the Svoge Emergency Branch, together with the service staff of MHL-Svoge, helped 10 injured passengers. The ambulance of the municipal hospital in Svoge was also replaced by the crash. After the treatment, all patients were transported to hospitals in Sofia.

Minister of Health Kiril Ananiev is in constant contact with the directors of the medical institutions. Immediately after the incident he visited Pirogov and the District Hospital, where he heard about the situation of the victims and the work of the medical teams.

Minister Ananiev thanks the teams from the emergency medical centers in Sofia, Vratsa and Montana and the medical institutions for timely medical assistance and professionalism. Day and night shifts worked during the night. And doctors, who are not on duty, also responded. Reinharding beds were also present. Kiril Ananiev reported that the National Center for Transfusion Hematology has enough blood from all blood groups. The necessary organization is in place and blood donation teams are ready to serve everyone who is willing to donate blood.

In Pirogov, Rumen Radev, the head of state, said that in order to fight the war on the roads, we needed mutual efforts from all sides.

The town hall remained open and the staff worked late. There were relatives of people who were traveling by bus. They wanted to learn more about the status of their family members.

City officials made lists. Up to now, 19 passengers have been collected. For one of them she was already clear that she was with the dead. The other 18 were injured. But there are still 15 people missing from the lists.

At 8:00 am yesterday the bus stopped at the town hall. People go downstairs to get something out of the way. They were all in an exalted mood and wanted to make a one-day trip to the Seven Thrones monastery.

The excursion is organized by the pension club and they are done almost every weekend. There were about 15 people in the village. There was also a child at the age of 13. It is one of the dead.

Late in the evening people came to the town hall in the hope of finding information about family members and family members who had gone on a fatal bus trip.

What the survivors of the victims say – see in the video:

Violet for victims in the crash will serve on Monday at the Seven Thrones Monastery.

The Holy Monastery was the destination for the crashed bus tour in the vicinity of Svoge.

About an hour before the grave incident, people came to the monastery to light a candle. The footage shows the bus stops in the parking lot and people go downstairs to see the Seven Thrones.

Abbot in the monastery said that the guide had invited people to go faster when the weather broke down.

They offered condolences to the relatives of the victims and prayed for the health of the wounded.

Two possible reasons lie behind the tragedy at Svoge

10 years ago the tragedy in the river Lim