Ivancheva to Dyulgerov: Did you get part of the money? 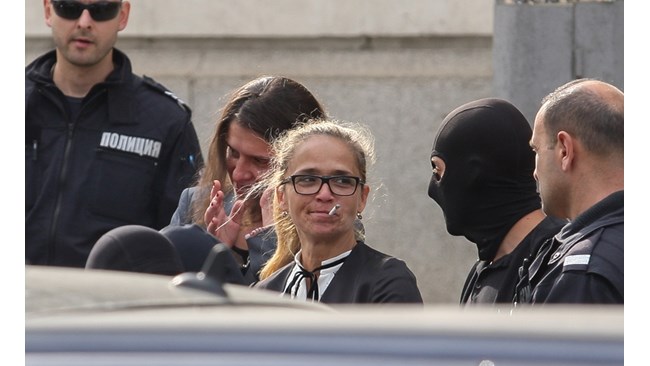 And the turnstiles in the mayor's car appeared

Do you have part of the money, "asked Dessislava Ivancheva bribe officer Petko Dyulgerov after the three and Billyana Petrova, her deputy in the municipality of Mladost, went into the service car in the center of Sofia on April 17th.

That he set aside the agreed 20%, responded Petko Dyulgerov. At that moment Ivancheva is at the helm, Djulgerov is sitting next to her, Bilyana Petrova is behind it. The exact course of the events of the arrest day is clear from the indictment of the already deprived mayor of Mladost Desislava Ivancheva, Bilyana Petrova and the former mayor of the region from 2007 to 2011 Djulgerov. It's all about it

he said to himself

immediately after his arrest when he acknowledged his involvement in the crime.

After Dyulgerov had confirmed that he had abandoned his cake, Ivancheva told him to sit back from Petrova. There he handed over three bundles of banknotes. Two of them had a nominal value of 100 euros and the third with 500 euros – a total of 56 thousand euros. € 14,000 Dyulgerov has set himself apart for his meeting with Ivancheva and Petrova. Dyulgerov waved the waffles to make sure the two ladies had money inside. Then he handed them to Billyana Petrova, who was standing next to him. She put them in a white box with the logo of a famous brand of luxury coffee. The time is 12.50 hours. It was then that Ivancheva called an employee from the district administration in Mladost. She told her that she had to find the case of the Wacklin Group at her office and had to move her immediately.

Precisely for this the bribe of Alexander Vaklin is required – to announce the order of Sofia's chief architect, which allows the Vaklin group to build. The procedure is formal, but without this the investor can not do anything. His file was filed in Mladost 10 months earlier, on June 16, 2016. During the investigation, the prosecutor's office found more than 1,000 such delayed cases, which followed in the Ivancheva office.

Immediately after the departure of Ivancheva with her subordinate Petko Dyulgerov. He walked to the National Theater. Thereafter, operational commissioners of the Commission for illegally acquired property (CPKONPI) began to follow the actions of the three. Dyulgerov is arrested at the entrance of Grand Hotel Sofia. It has found 14,000 euros. He admitted that it was his part of the bribe as an intermediary between Ivancheva and Alexander Vaklin. Businessman Dyulgerov met the same day at the Memento Cafe on Rakovski Street in the center of Sofia. Vaklin gave him the first installment of 70,000 euros. In the same location

He counted 20% of them and called Bilyana Petrova at exactly 14.14 hours. He said that he would be waiting for them at 11.30 with Ivancheva in the Crystal garden without suggesting that his conversations were being tapped. There at an outdoor table they spent more than an hour talking, writes in the indictment. All the time the money packages were at Dyulgerov. During the conversation they discussed the case study of Vaklin Group. Then, around 12.40, they step into Ivancheva's service car, parked at 11 Slavyanska Str.

After the divorce Ivancheva and Petrova drive the same street, they go to Vassil Levski Blvd, where their car is stopped by agents of CPONPI and the police. The car is searched and door-to-door linings, the steering wheel, the gearshift, the windshield wipers, the direction indicators, the buckles, the ignition key are taken. All these places in the car are "illuminated by" the substance with which the money is marked. This refutes the version of Ivancheva that she encounters her palms as she writes protocols of the search after the arrest. Her defense claimed that the researchers had counted the marked money and then filled in the records, so the substance fell on the sheets and then on the palms of both. However, these actions were carried out outside the car.

Apart from the hands of Ivancheva, a substance of the money is also on her mouth and nose. But more "shine" Biljana Petrova, who took the money from Dyulgerov in the backseat. It has a substance on the left hand fingers on top of the palm, right on the nail, around the mouth and the décolleté.

Desislava Ivancheva's notebook, opened in her handbag, is also a curious find of the researchers. The following accounts were opened on the first and second sheets:

It would be the squares of the buildings he wanted to build Waklin, multiplied by the amounts in euros, which he had to pay every square meter to move the files.

Otherwise, Petko Dyulgerov's investigation and statements made clear that Wacklin had to surrender the full amount of EUR 250,000 in three installments – about EUR 70-80 thousand.

The file of the Wacklin Group was filed on 16 June 2017 in the Mladost district. On October 9, the company filed an application to take action to inform the Chief Architect. A week later, the architect Zdravko Zdravkov himself was arrested for the delay. On 12 December 2017, Vaklin filed a lawsuit requesting Ivancheva to move the case.

It is clear from the accusation that Desislava Ivancheva was angry with this matter and told Dyulgerov that she had personally accepted the case. She was determined to wait until the case would end and then move the file. It ended mid-July and showed a 24-hour voucher to Sofia's administrative court. It is terminated because in the meantime the file of the Vaklin group has been moved by the acting mayor of Mladost Arch. Rumen Russev.

Vaccine was looking for ways to meet Ivancheva to solve the problem, he wrote in the indictment. His acquaintance with a construction precursor connected him with the former mayor of Mladost Petko Dyulgerov, who still had influence in the administration. Even his secretary from that time stayed with Ivancheva, Billyana Petrova said Tuesday in a ghost when they refused to release her from the arrest.

So Djulgerov began to mediate and meet Ivancheva and Vaklin with both parties. In the meantime, however, the investor has confiscated a CPCONPI and the researchers follow every conversation and move from Ivancheva, Petrova and Dyulgerov.

On March 16, a month before the arrests, the three were seen in a pizzeria in Borovo. There, Vaklin decided to pay 250,000 euros, and Dyulgerov told him the amount. This happens during a meeting between the two on 3 April. Then Dyulgerov realized that Vaklin had other investment intentions on the Mladost territory. They noticed that if he pays 20 euros per square for the buildings he wants to build, he has to give 1 million euros for everyone. Then Petko Dyulgerov offered to talk with Ivancheva for a discount and to lower the price to 10 euros per square meter, or 500 thousand euros for all buildings.

On 16 April Djulgerov called the businessman and told him Ivancheva that he would not continue until he had accepted the money. So they agreed to hand in the first bribe payment the first time the three were arrested.