Prosecutors will investigate a driver, carrier and repair for the massacre in the vicinity of Svoge (Obzor) 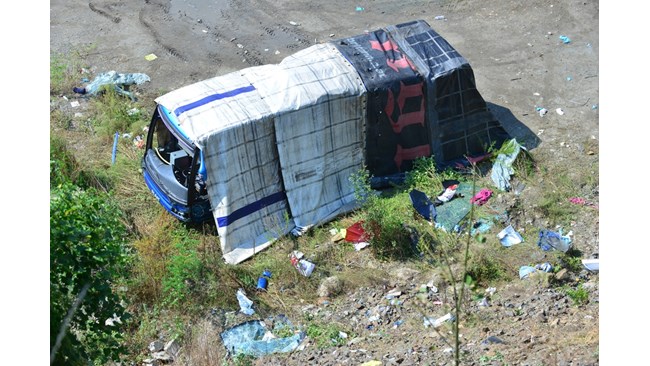 The blame, company leaks, bus owner and asphalt lay by the road repairing contractor – these three directions will be followed by the investigation into the Svoge crash, in which 16 people were killed and 21 seriously injured. This was announced by the chief prosecutor Sotir Tsatsarov during a briefing in the Council of Ministers. On Sunday Prime Minister Boyko Borissov gathered researchers and ministers to discuss measures against the war on the roads.

"The driver has all categories of competence, he has been punished twice for violations and has seven records – a belt, for incorrect parking, but not for driving with alcohol." His samples were taken after the accident, they were negative. it appears that this is true

There is also a version that can not yet be proven that his attention to the crash was kidnapped. Prosecutors will assess the grounds for charges against the driver, "Sotir Tsatsarov said for the first time in the investigation into the tragedy of Saturday So far, the police officers of Sofia's regional directorate have worked in the Ministry of the Interior, but the case will be treated Monday by the National Investigation.

"I heard a sound of brakes, I looked up and saw the bus going through the cloak linella, rolled four times before it fell to the site, two people had fallen," he told a 24-hour witness to the crash. He explained that the rain began to rain a few minutes before the incident. The road was dusty and there was a wedge that prevented the tires from coming into contact with the asphalt. After he went to the place, the man saw that

no traces of it

"This means that aquaplaning has just happened," said the eyewitness. According to him, the cause of the crash is the aquaplaning and the high speed of the bus. "If you come from Svoge and drive to Sofia, it seems like the road is good and that is not the case.There are two treacherous curves, just after one of them stumbles," the man said.

"The road was very wet, I saw in the mirror how the bus slips and a second later I felt a shot, I heard two more crashes in a second or two, and after another five – a terrible crash comes a little further" , said another driver.

"The second guideline in the research is related to the carrier: it is a commercial company with two owners, one of whom is the director Grigor Grigorov, the company is small, and for the specific occasional transport they do not have the Ministry of Transport on the level as required by law, and the bus did not have a regular technical inspection, the last one was on February 5, 2018. On August 5th another one had to pass, but that had not happened.

That does not mean that

the bus is not

"The company is" Mobilus 5 ", with a license until 2027. Driver Grigor Grigorov has a psychological study valid until 2021, as well as a valid qualification card and all documents have been transferred to the research team," Transportminister Ivaylo Moskovski said. (More about the company, see page 3)

The third directive in the accident investigation is a new moment in similar incidents. Prosecutors will investigate the state of the road, how the asphalt should be laid and everything that could lead to accidents in this segment. "It is not right to call the contractor, but it is public in all registers," said the chief prosecutor.

The road through the Iskar Gorge is rehabilitated under a public agreement. The contractor is Trace Svoge, a subsidiary of Trace Hold Group. the contract is 2011 for BGN 23 million excluding VAT.

Asked for comments due to the incident, the construction company refused to comment.

"5 times in recent months Road Infrastructure Agency has asked the contractor to remove defects in the area where the crash took place.The last letter is July 27. Immediate start-up of restoration activities with a deadline of August 15 was requested, but such a repair has not started, "the regional minister Nikolay Nankov told the briefing.

He specified that the road through the Iskar Gorge had a technical passport that was issued in February 2017, and that the rehabilitation activities were completed in December 2016. The experts from the state administration then signed all minutes without comments.

Nankov pointed out that the district police directorate had registered APIs for dangerous parcels by the end of 2017. She asked the company to contract the defects contractually, but that did not happen.

Only the police chief of Svoge sent 3 reports to API in the last months of 2017. He pointed out the need for urgent safety and asphalting.

Sotir Tsatsarov even read the letter to the police with the words: "From November 27, 2017 to early 2018, there are 6 crashes with 1 killed and 6 injured, despite the 40 km / h limit due to poor grip on asphalt, drivers lose control and go on the road. "

The chief prosecutor added that it is possible to investigate officials of the API and the repairing contractor on the road.

The courier Mobus 5 was registered in 2010 in Bozhurishte. Grigor Grigorov, the freight driver, is the manager and co-owner of the company. His partner is Rumen Pavlov, who holds the majority of the shares.

Apart from occasional services such as those on the fateful Saturday, the company's buses also lead children from the local kindergarten and school to the neighboring villages.

According to Grigor Grigorov, he is an experienced driver who had an ambulance in Sofia before he started his private business. Bozhurishte Mayor Georgi Dimov also defended Grigorov and said that until now there was no problem with it.

Mobius 5 Ltd. has since 2014 signed a contract with the municipality of Bozhurishte for an amount of BGN 451,000, but was signed by former mayor Asparuh Asparuhov.

The company is registered at the home address of Grigor Grigorov in Bozhurishte on "Yagoda" Str. His house was under police custody during the weekend.

The company has a valid license until 2027, but since it became clear after the incident, the bus of the crash had no technical assessment on August 5 and the manager driver did not inform the automobile administration of his course with the pensioners.

The asphalt was quickly exhausted by the band that deviated due to the repairs to Hemus,

They took samples from the sidewalk the day after the crash, the road was repaired for 23 million leva in December 2016.

The inspection of the asphalt on the way to the Iskar Gorge began on Sunday at the request of the chief prosecutor Sotir Tsatsarov. Experts took samples from the sidewalk in both directions from Sofia to Mezdra. There are dozens of signs that the floor is worn, only 2 years after the end of the repair, and this does not offer a good grip on the tires of the car.

Moreover, precipitation in the mountain area often puddles on the road, which is a prerequisite for aquaplaning. In many places ruined asphalt, broken mantel walls and fencing facilities, as well as fallen traffic signs.

The limit of 40 km / h in the crash section is accurately determined by the bad road surface, which was completed in December 2016.

The contractor of the site is a consortium "Trace Svoge" with a leading partner "Trace Hold Group" AD with the participation of "Road maintenance Dupnitsa" Ltd. The consultant of the project is "Portconsult 2000" EOOD, which in recent years is the supervisor of public construction contracts for more than 43 million leva. The company is family of the deceased SEWRC director Konstantin Shushulov, showed a 24-hour audit.

The 81 km long rehabilitation project is from Mezdra via Svoge, Eliseina to Novi Iskar. The money comes under the state investment program and most of the funding comes from the European Investment Bank. The remaining 35% is paid from the budget. The total value is BGN 23 million excluding VAT. The contract was due to be closed in September 2015, but the bond was scrapped in December 2016.

The contractor's company refrained from commenting while the test was running. According to Adriana Georgieva, head secretary of the Branch Chamber Roads around Leskov Dol, there is a risk of catastrophe. The road was repaired under the "Transit Roads" program, allowing only rehabilitation, but without the possibility to change the profile of the road. The repairs are carried out according to the requirements of the project: floors, slopes, drainage. There were also all the necessary elements: signboards, traffic signs for speed limits and yellow signs for concentration of accidents.

With careful driving and observing the instructions, there is no way to do an accident, says Georgieva. The road has been in operation since 2014 and since then there have been road changes due to repairs on the Hemus motorway, all trucks cross the Iskar Gorge. (24 hours)

Experts write a day before the crash: the plot is risky, the asphalt is in a miserable condition

An analysis by the Institute for Road Safety indicates that the route through the Iskar Gorge is particularly dangerous on August 24, the day before the crash.

"In many places the asphalt pavement has been damaged and in poor condition, actually less than 2 years after the completion of the site," wrote the Institute of Road Safety, whose experts were on-site on August 3 and made a check of the situation a clearance of 34,000 leva otherwise the road is 82 km long. A contract for public procurement for the rehabilitation and reconstruction of the section was closed 7 years ago. The value is BGN 23 million excluding VAT and the implementation period is 2 years plus one for reporting defects. Construction work was officially completed on 27 December 2016. The Road Infrastructure Agency responded to questions from the Institute. According to them, there was a view of the road after his rehabilitation. Protocols have been drawn up and defects have been described. The removal must be done by the company that won the contract. It is intended that it happens before the winter begins.

Experts from the institute have asked the API if and how much money has been spent cleaning the roadside graves of fallen stones, replacing traffic signs that have been broken and trimming shrubs since the beginning of this year. On 23 August, two days before the accident, API replied that the maintenance activity was carried out by the company, which maintains the republican roads in the Sofia region and until now, 34 thousand BGN have been issued for this part of the road since the beginning of the year. with VAT.

According to the information provided by the RIA, 65% of the BGN 23 million for the rehabilitation of the road comes from the European Investment Bank, 35% of the state budget, as well as the 20% VAT.