Simeon loses the Vrana Palace, but takes 1 million leva from the state as a good owner 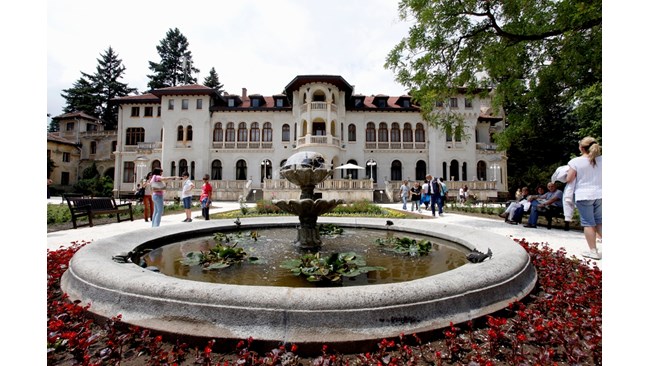 Simeon Saxe-Coburg-Gotha and his sister Maria Luisa Hrobok have to return the Vrana Palace, the park next to it and the entire building complex of the state, but after receiving BGN 1 323 495 for their repairs and restoration.

This was decided by Judge Petya Alexieva. Her opinion was expected, but it is still not definitive and can be called upon.

Apart from the former prime minister and his sister, the case was also brought against their five cousins, children of their aunt princess Nadezhda. They were not convicted, however, because at the beginning of the case in 2011 they saw the state as the owner.

The Vrana complex is located on the outskirts of Sofia.

with an order from Sofia Mayor Stefan Sofiyanski. The royal heirs then donate to the municipality of Sofia the park, preserving the ownership of the palace and the adjacent site of 21 decares. In 2013 the Metropolitan Municipality will open the park for visitors on Saturday and Sunday.

The palace complex consists of a central building of 2013 square meters, more than 20 buildings, conservatories, a hut, a forest house and more. The area of ​​the park is 992 decares.

In addition to ownership, the state also claimed more than 6.9 million BGN as compensation for 10 years of unlawful use of the property together with an interest of more than 1.5 million leva.

The argument – the building is a monument of culture, can not be rented, and therefore the real owner can not claim lost profits.

"It was not the king's power of attorney in his transactions, as such authorization (by law) has not been determined by any of the rules or rules governing the civil list," the court said.

The dispute over this case, which initially ended 7 years, consisted of whether the intendant was a government agency.

According to the proponents of Simeon, this is the organ with which the royal family has been involved in the civilian turnover.

"Because of the integrity of the monarch's personality, he can not get along with other people on an equal footing, and the Queen of England does not personally participate in the revenue of the civilian population, but does it through Intendant," explain lawyers.

During the trial, the defendants of the former prime minister and his sister announced that the improvements in the old palace in Vrana (the hunting lodge) and the new building totaled BGN 1 445 000. However, a person calculates them at 1 323 495 BGN.

The court agrees with the conclusions of other expert reports

the facades of the

the old palace is

"The ceilings of the representative rooms of the house – the White Lounge and the dining room, as well as the royal chambers are sculpted with decoration of plaster ornaments and friezes in the style of the era," writes Judge Aleksieva.

For the new palace, which was built between 1909 and 1912, the court also took note of the improvements.

"The so-called An antechamber for the main entrance has a metal structure with stained glass that was built during the same historical period," the court said.

Lawyers of the state under the so-called 'real' are lawyers from the Iren Savova office.

"This is an excellent success, as far as ownership is concerned, the Court's decision is correct, I do not expect any surprises in Strasbourg, we have presented convincing evidence that the palace is the state," Savava told 24 hours. She and her colleagues will, however, appeal against the decision in her part that the state must pay 1.3 million BGN for repairs and improvements.

Apart from the Vrana case, the disputes concerning Sitnyakovo, Saragyol, Tzarska Bistritsa and Vrana are also resolved, with a surface of 1414 acres one kilometer from the palace and the park. The solutions for Sitnyakovo and Saranjol are also final. And in these cases played a key role for the success of the state the documents of the Intendance of the Majestic Civilian List or His Majesty.

The case for 16,500 decares Rila Forest has not yet been completed initially in Sofia's court.

The lawyer of Simeon: Disappointing! Everyone knows that this is the king's house

A very disappointing decision for us. There is almost no one who touched this matter to be aware that this is actually the king's house. This is what the lawyer of Simeon II Eli Hristova responded to in 24 hours. However, she explained that she only had information from the media and did not see the decision and the motives of the court as a whole.

"King Ferdinand bought the piece piece by piece, built the old and the new palace, made this beautiful park," Hristova explained. She expressed her surprise that it was still claimed that it was the work of the state. "She can not hide behind the perishable view that the inventory of the Civil Sheet was the property of this property, because it does not matter in the present case," Christ added. He reported that in 1928 attempts were made to create a notarial deed for Vrana in the name of the intendant, similar to the other places, but the then notary Hristo Omarbaliev, who perhaps the largest capacity in the history of the Bulgarian civil-law notary is, refused to sign. In other words, he has discovered that what is written in this project – that the Intendant is the owner and has governed these qualities – does not answer the truth, explained Hristova. This totally excludes the question from Intendant in this case, it was categorical. He expressed his disappointment at the fact that the issue of intention had passed "in inertia" in all cases of royal restitution, based on the first judgment of the Court – the Krichim case, which was multiplied by all subsequent panels of justice. After the changes in the law, this injustice was abolished, but no one listened to our arguments, Christ said.

In 1990, this property became the property of the municipality of Sofia – both the park and the buildings, according to the lawyer. And it is a few years before the restitution laws have been adopted. "And the state before that had led to the complete destruction of these properties." The sky was seen – from the ground floor upwards through several floors, and the documents with which the state passes on the buildings to the municipality of Sofia clearly reflect this, she added.

"It is only after the king invests millions of heights in the reconstruction of this property and he is already worthy of the state, that the state at one point decides that he can obtain it without any means, and by admitting his own unlawful behavior. cry, "Christ observed. She pointed out that despite the decision of the 1998 CC that a specific law on royal restitution had to be adopted, the state did not. 20. She demanded one million euros in damages, which, as I understand it, the judge did not accept that she were guilty of the state, the royal lawyer added.

"When I contact my customer, we decide what we are going to do, but I believe this matter should be challenged," said Hristova, but he predicted his end was premeditated and the case sooner or later Strasbourg would reach.

The park remains open to citizens, the municipality emphasizes

Our wish is that Vrana Park remains open to citizens. We will continue to support the royal garden, the Municipality of Sofia said for "24 hours" about the decision of the court declaring the park and the Vrana Palace to be state property.

In 2001 Simeon Saxe-Coburg-Gotha and Maria Louisa donated the municipality 968 097 square meters of the park. It was open to visitors in 2013. Since then, the royal garden has been visited by more than 300,000 people. The town hall also has a bus line that allows more people to reach the park museum, where more than 820 trees, shrubs and grasses can be seen.

"Years ago, the SMC decided to accept the donation of part of the park.If the following authority confirms the decision of the court and becomes final, our decision is invalid.My personal opinion is that the municipality in such a situation the state park must ask to keep it available to citizens and to be open on weekdays, not just on weekends, as it is now, "he said. 24 hours "the chairman of SOS Elena Gerdjikov.