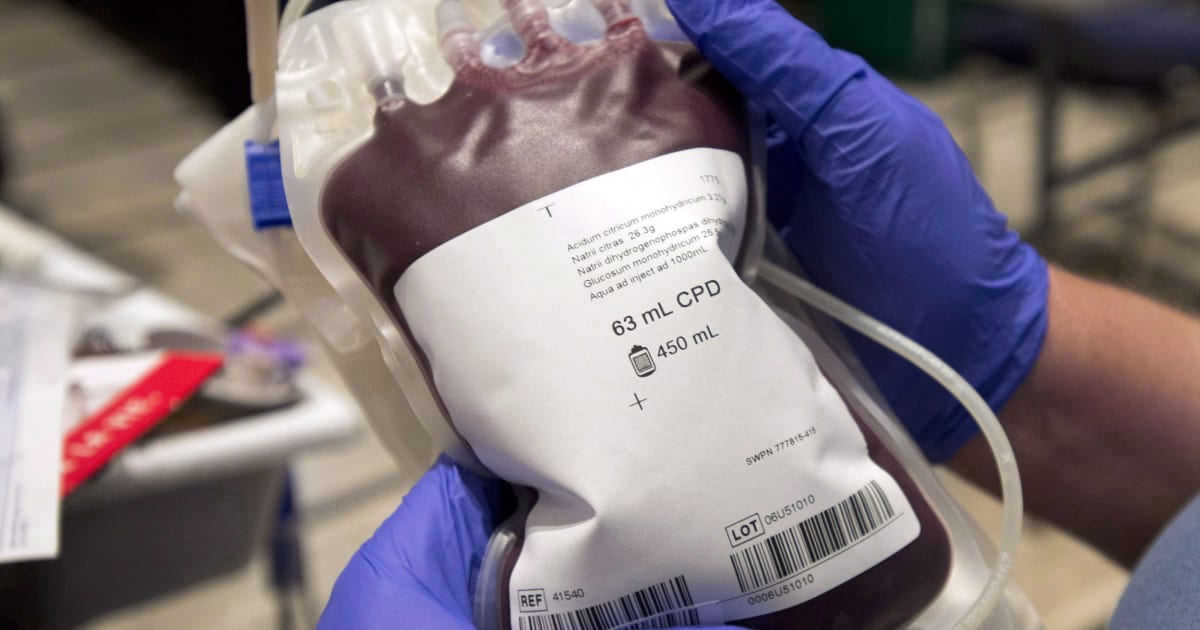 If you have not donated blood in recent months, and especially if you are Type O, Canadian Blood Services recommends that you consider this the following week. The organization says a significant influx of donations by the end of August will be crucial to meet its transfusion needs – but the urgency of the call causes some people to question the methods used by Canada's health authorities when selecting donors.

"Summer is a bit of a slower time for blood donations," says Lilet Raffinan, manager of several Canadian Blood Services GTA locations. "People go on holiday, the need for blood is not." Donations often decline in the summer when people are no longer in their usual routines. This is particularly the case during summer vacations, such as the upcoming long working day of Labor Day, says Raffinan.

Blood donations are regularly used to treat people whose blood does not function normally, such as people with leukemia (blood cancer) or aplastic anemia (a condition where the body of a person stops producing enough new blood cells). It is also used during heart surgery or when people may lose lethal amounts of blood, such as a car accident. Blood donations rose in Ontario in April, in the aftermath of the Toronto Van attack, says Raffinan. 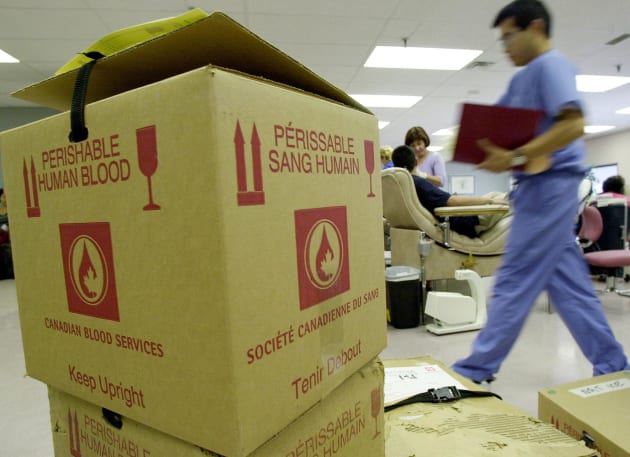 Boxes with donated blood are waiting for pick-up in Toronto after the terrorist attacks of 11 September 2001 in New York. Blood donations tend to go up after disastrous events.

Some accidents are also more common in the summer – Toronto and Mississauga have seen an increase in car accidents in recent months, according to Raffinan. According to her, treating patients for a single car accident often requires up to 50 individual blood donations.

Last week, CBS made an appeal on 26 August to ask 22,000 new donors. They need donations from all blood groups, but are mainly looking for donors whose blood group is O. O positive blood can be given to anyone with a positive blood type, whereas O negative is the universal donor and is often given by transfusion in emergency situations where doctors do not have time to check a patient's blood group.

The Blood Services inventory on both blood groups is quite low: they have only two and a half days of O-positive blood and only one day of O-negative. 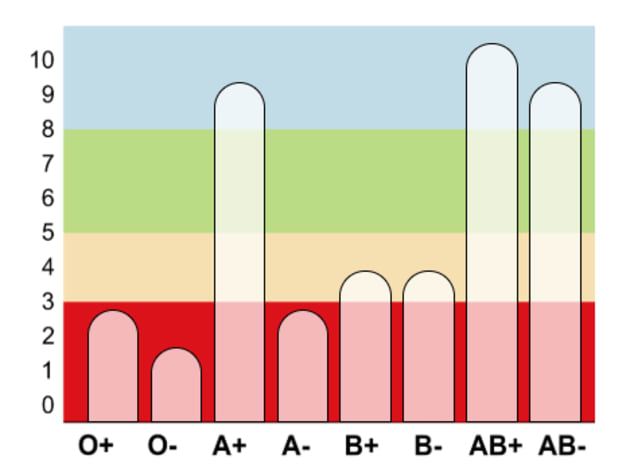 Blood inventory of Canadian Blood Service, marked by the number of days remaining, per blood group.

Most healthy adult Canadians are eligible to give blood. People are not eligible if they have certain chronic conditions, such as Crohn's disease or lupus, if they are taking medicines, such as Accutane or Etretate, if they have spent time in certain countries when certain diseases were common, or if they a tattoo or piercing in the last three months. Statistics Netherlands provides a complete list of suitability here.

Some donor rules have been relaxed

Starting last April, different criteria for blood donors have been relaxed, including the guidelines on tattoos and piercings, which abolish the maximum age limit for seniors, as well as the 12 hour wait to give blood after drunken or weed smoking.

A group that is specifically excluded from obtaining blood donors is sexually active gay men. After contaminated blood was distributed in the 1980s before there were viable tests for HIV detection, a man who had had sex with another man since 1977 had a lifelong ban on blood donation by both CBS and his counterpart in Quebec , Héma-Québec. In 2013 gay or bisexual men were allowed to donate again – provided they had not had sex with a man in the past five years. In 2016 the timetable was changed in one year.

The policy that blocks men who have sex with men (often shortened to MSM) is "clearly discriminatory," says Gary Lacasse, executive director of the Canadian AIDS Society. "Sexual orientation does not fully reveal the risk factor," he says. "It speaks a lot about stigmatization of the LGBT population."

Lacasses is not the only one in his opinion. The "homosexual blood prohibition" has been called unnecessary and unjust by many in the LGBTQ community and beyond. Prime Minister Justin Trudeau campaigned against the end of the policy in 2015 and said that it "ignores and must stop scientific evidence. (His government is responsible for the change of 2016 from five to a year, which according to opponents does not go far enough.)

"This policy is rooted in a bias," lawyer and human rights lawyer Christopher Karas, who is gay, told HuffPost Canada. "I feel that I do not really have a purpose in society if I get dismissed if I try to help."

Marco Ouji, a communications officer at CBS, told HuffPost Canada in an e-mail that the policy is not meant to be discriminatory. CBS and Héma-Québec are currently supporting research projects that, according to him, "can develop the current eligibility criteria for men who have sex with men".

CBS says they are imposing the one-year window on men who have sex with men, because that is the demographic group with the largest number of new HIV infections. This is true in terms of a national average, but also somewhat misleading: while 55.5 percent of new HIV infections across the country represent men having sex with men, these figures vary widely across the country, according to CATIE, a Canadian organization dedicated to providing information about HIV and hepatitis. In British Columbia, Ontario and Quebec, MSM represented only more than half of the new infections, while in Alberta and Manitoba about half of the new infections came from sex between heterocouples. In Saskatchewan, MSM is related to a new HIV infection in just eight percent of the reported cases.

I am a homosexual man. I am married to my husband. Why can not I give blood?Gary Lacasse, executive director of the Canadian AIDS Society

"That's what we are offensive about," Lacasse of the Canadian AIDS Society told HuffPost Canada. It is "completely false [to say] MSM contributes to most cases when it is a few percentage points higher. They ignore that at least 45 percent of people who annually infect HIV are heterosexual. & # 39;

The Canadian AIDS organization, as well as many other LGBTQ-friendly groups, would like CBS to change into a model that assesses potential health risk donors based on their specific behavior, not their orientation. "I am a homosexual man, I am married to my husband, why can not I give blood?" Asks Lacasse. "A homosexual man and a heteroman equals the same risk, we both have the same risk of HIV." 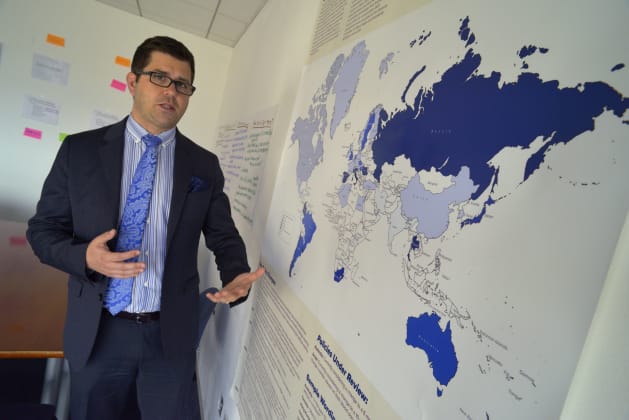 Jason Cianciotto, director of the non-profit organization Gay Men's Health Crisis, is on a map with international guidelines for blood donation for men who have sex with men.

All donated blood is tested for HIV, regardless of who it comes from

All donations to CBS run through antibody testing and testing of nucleic acids to detect HIV. There is a short timeframe – about nine days – when newly transferred HIV is not detected in the blood. Dr. Jonathan Angel of the Ottawa Hospital, an HIV researcher, explains that this means that anyone who has contracted HIV within nine days of donating blood may be able to report the disease without knowing it. It is the same for everyone, regardless of their gender or orientation, he says. "The window is characteristic of the virus, not for the individual."

When asked if he thinks the MSM policy is discriminatory, Angel hesitates. The situation is "complex", he says, but in his opinion the ban is an example of CBS that "simply fulfills its primary role to protect the population against known and unknown risks". But he also thinks that the arguments against the prohibition are reasonable. "Many people insist on the argument that it should be less restrictive for HIV, as elsewhere, and if that is your focus, you are not wrong to argue that." 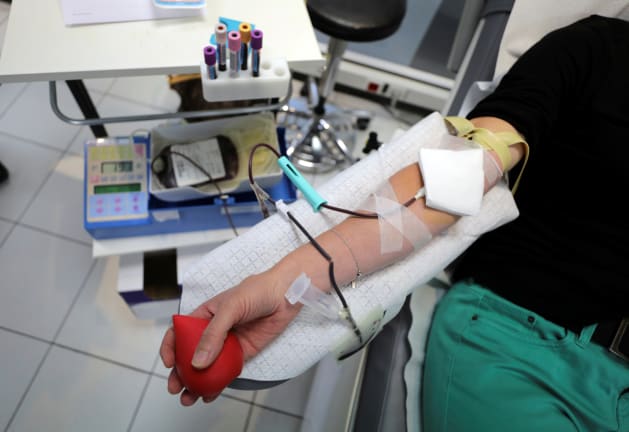 A volunteer donates blood during the International Blood Donation Day of France in Nice on 14 June 2018.

Trans people can give blood – in some cases

There are also different criteria for transgenders, partly because blood donors have traditionally been coded as male or female and have been treated differently on the basis of different risks related to gender. That changed at the end of 2016, when Statistics Netherlands standardized their screening process for transdonors and updated their computer systems to take into account more than two gender identities.

Both trans men and women who have undergone sex confirmation must wait a year after the operation before giving blood. 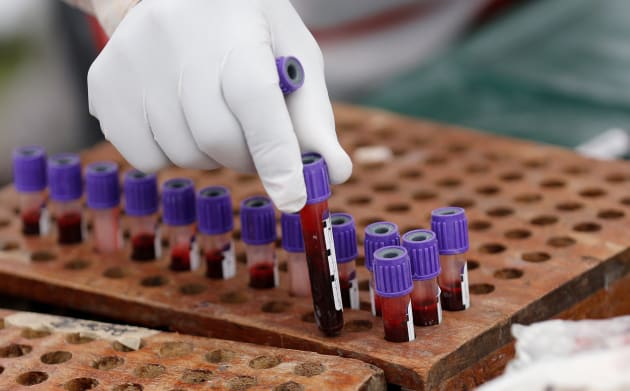 A doctor arranges blood samples donated during a Valentine's Day campaign in Nairobi, Kenya on February 14, 2018.

Lacasse is part of groups that met with Statistics Netherlands to reduce the one-year deferral period for MSM to three months, which has been the policy in the United Kingdom since last year. That is only slightly encouraging, because he says that even a three-month ban is based on false logic. It is "not a complete removal of the ban," says Lacasse. "So that indicates that it is not based on behavior."

Raffinan says that Statistics Netherlands is committed to making progress, but that progress is slow. "The policy is constantly being revised," she says. The ban on "going to one year indefinitely to five years" is such a big trip. "

Angel says he thinks that the year-long postponement policy is likely to soon change to a three-month delay, although he admits that the numbers are fairly arbitrary. "Why not six months? Why not four months? Why not two months?" he says.

Lacasse also says that he would like to see clearer guidelines and a more respectful treatment of transgender people. "We want to see respect for the transgender community," he says, adding that trans people "have enough problems [with discrimination] like it is."