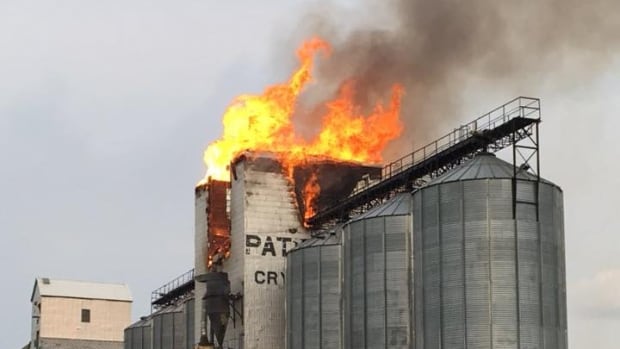 A devastating fire tore through Crystal City, Man. On Monday night, reducing a grain elevator to ash and severely damaging a hardware store.

STARS Air Ambulance transported a man in his thirties to the hospital with burns. He is in a stable state at the Health Sciences Center in Winnipeg, a spokesman for STARS said.

Residents say that the elevator went up in flames around 18:00.

The fire also spread to the Cudmore Bros. Hardware building, which is less than a block from where the elevator collapsed.

Colleen Henderson, who is part of the emergency team in Crystal City, described the initial eruption as an explosion.

"It is in the middle of our city, right along our railway line," she said. "We try to keep everyone safe."

It was huge, huge flames, which they apparently could not even try to control.– Cathy Beavis

Cathy Beavis, who lives two blocks away from the grain elevator, thought she heard it thunder before she saw flames instead.

"It was huge, huge flames, which they apparently could not even control," she said.

Firefighters from surrounding communities descended on Crystal City – 155 kilometers southwest of Winnipeg, not far from the US border – to tackle the fire.

Local farmers and a nearby Hutterite community ran together to fetch water, while other neighbors cooked food for the fire brigade, residents said on social media.

Unbelievable shame that our beloved elevator burns tonight, but so wonderful to watch a community that meets, farmers from everywhere who fetch water and people who make food for our firefighters. #crystalcity pic.twitter.com/A5lWRpibH9

Beavis said that the elevator, owned by Paterson Grain, is invaluable to the community.

"Today there were just grain trucks that supplied grain," Beavis said. "It is always used here by our local people, it will be a huge loss for our farmers."

Manitoba Hydro says that 270 customers in the region are without power as a result of the fire. An estimated recovery time is not available.

Paterson Grain did not respond immediately to a request for comment on Monday night.