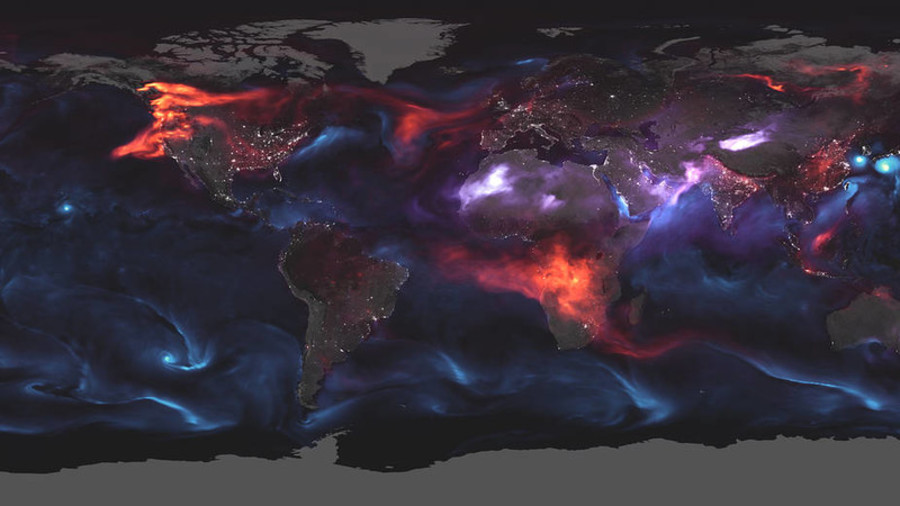 A new NASA image that paints the different types of aerosols in the air shows that we may get more than we expected with every breath.

Aerosols – solid and liquid particles emitted by oceans, deserts, mountains and forests – are all around us. But now, with the aid of a model called the Goddard Earth Observing System Forward Processing, NASA has developed a graph that gives a beautiful picture of exactly where on Earth these aerosols are made and how.

The result is a swirling, psychedelic abuse of phosphorescent colors that represent each of the different types of aerosols in our atmosphere.

Blue marks the sea salt that is hunted by ocean storms, while red represents black carbon emitted by vehicle and factory emissions, as well as various forest fires that continue to rage throughout the world. Dust particles are highlighted in purple. & # 39; The world's largest cities are marked with a day-night band from the Joint Polar Satellite System of the space agency.

The image was collected by the Earth observation satellites Terra, Aqua, Aura and Suomi NPP. Each orbiter captures the small particles from a different perspective.

READ MORE: NASA astronaut asked ground management what the & # 39; alien-like & # 39; object was that he saw in space

High aerosol amounts occur at different times around the world. According to NASA's Earth Observatory, high levels occur in South America during the summer, while forests are being burned in major land clearance projects in the Amazon basin. Similar incidents are seen in Central America and southern Africa.