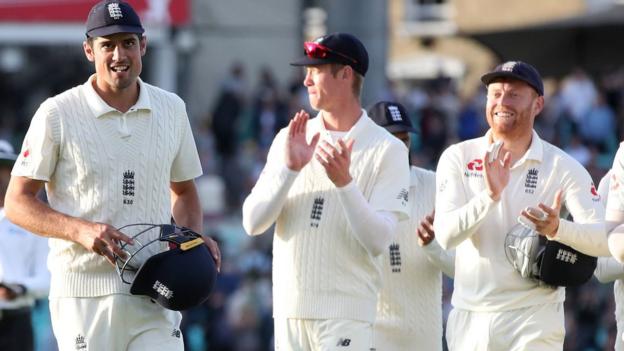 England took full control of the fifth test against India on an astonishing fourth day in The Oval in which Alastair Cook closed for a century and James Anderson equaled the record for Test Wickets as a pace bowler.

Cook made 147 in his final innings for international retirement and Captain Joe Root weighed in with 125, as England stated at 423-8.

Anderson then came in line with the pace bowling record of 563 Test wickets from Australian Glenn McGrath, while India, on the hunt for an unbelievable 464 victory, failed.

The crowd with near-capacity spent much of the day on their legs as cook and carrot with the club, and then Anderson with the ball, India under the cosh.

It was a historic day in general for Cook, who surpassed Kumar Sangakkara and became the fifth highest test run scorer – and the most productive left-handed – before reaching his 33rd and last test-time.

The former captain shared a huge collaboration with his successor Root, placing 259 runs for the third wicket.

Cook got a standing ovation at the beginning of the day, then again when he reached three figures, before the whole ground was applauded when he left the field after beating the last time.

While India looked mentally exhausted, Anderson made hay in a frantic evening session, where Shikhar Dhawan and Cheteshwar Pujara were turned down in three balls to move in one wicket from McGrath and become the leading fast bowler in Test cricket.

India captain Virat Kohli fell to Stuart Broad for a golden duck when the party mood grew in the sun-drenched stands.

The crowd chanted the name of Cook during the last five minutes of the day, and the team applauded the fans as they came off the field at the end of the game.

The cook comes to life in oval heat

Cook did not always look fluent in this series, but on Monday 46 he resumed flickering of the player who had been the backbone of England's battles for so long.

There were clips of the hip and cuts against the spinners, as well as a fine straight ride as he moved through the gears.

India lost its lines when bowling to Cook, and their only real chance came when Jasprit Bumrah handed out a sustained flood of short deliveries and tried to lure him into a loose hook.

Cook's century rose in a farcical way – at 96, he pushed and ran for a single, but a poor pitch from Bumrah went for four times and brought him to 101.

He was embraced by Root and received a second standing ovation of the day – eventually he had to ask the crowd for calm so that the game could resume.

His resignation was almost a shock, falling behind when he tried to chop Hanuma Vihari, the ball after Root was caught deep in the middle of the wicket.

Every member of the India team shook his hand as he left for another standing ovation, which hung for an extra second on the border to enjoy the applause.

As Cook has done with the club, Anderson has been a spearhead in the last 10 years in bowling England, both at home and on the road.

The partnership of Cook and Root, as well as some late attacks from the middle order, kept India in the field for 112.3 overs and Anderson managed to exploit their scrambled eggs when the tourists came out.

Opener Dhawan played around a complete delivery and was trapped for the middle stump for Pujara, who in the previous test made a century, missed an inswinger and also closed lbw.

That brought Kohli, who did not dismiss Anderson in this series despite the fact that he has pruned him several times during the last tour, to the fold.

It seemed inevitable that on such a dramatic day India-captain Kohli would be the wicket to carry Anderson beyond McGrath's long-standing reputation.

However, Stuart Broad interrupted that storyline. He tempted Kohli to a loose blow to the first ball he encountered and the resulting lead was caught by wicket-keeper Jonny Bairstow to leave India 2-3.

The Oval stood up again while they, and the slump of England, seemed convinced that Anderson had captured KL Rahul lbw, but a review showed that the ball went over the top of the stumps.

Anderson, like him, could not find the wicket to take him past McGrath's record and add his record of 23 wickets in the series so far, and hopes to do so on the last day of the match – and series – on Tuesday.

A story of two tons

If Cook's century was a farewell greeting, then Root's was a welcome return to shape prior to the winter tour to Sri Lanka in November.

For today Root had not made half a century for eight innings and his last century came in August 2017 against the West Indies.

He got two strokes of fortune. Ajinkya Rahane had a difficult chance to finish Ravinda Jadeja with Root in the forties, before Pujara Root dropped on 94.

In between there were some nice photos, especially when Root skipped the pitch and Jadeja hit six on the floor.

His century was emphatically celebrated, Root ran a quick single from Jadeja before he heard a roar of relief.

He and Cook seemed to be bothered by an exhausting attack from India and it was ultimately a misjudgment of Root, caught when he tried to attack Vihari, who ended a profitable collaboration.

A little later, more misery broke out about India.

Ben Stokes hit a 36-ball 37, Jadeja hit six on the floor before lifting Shami for four over the briefs.

Even number nine Adil Rashid came in, lovingly covered the round and turned the ball to the third man, before the declaration came fully in the hands of England.

"It was one of the great days of English cricket, because Alastair Cook found that rhythm with the club in hand, after the emotional roller coaster he went through this week, is remarkable.

"We have watched him for 12 years, but those innings were up there with one of his best.

"He had his whole family on the balcony and he had a crowd of 18,000 people who came to see him, and he did not disappoint."

Alastair Cook from England, in conversation with Test Match Special: "It was an incredible way to finish It was a weird week but I was just determined not to leave early because it would have been an anti-climax, but going out like that is the perfect way to finish.

"I do not think there was any doubt that I could play, but I certainly found the last 12-18 months more difficult.

"My greatest skill is that I can get a lot of emotion out of my stroke and take one ball at a time, and if there has ever been a test, it was this week.

"To perform in this way probably shows my greatest strength."

Asked about how he feels, Cook adds: "I can not really describe how I feel, I want to go back and look at it now to see how special it is."