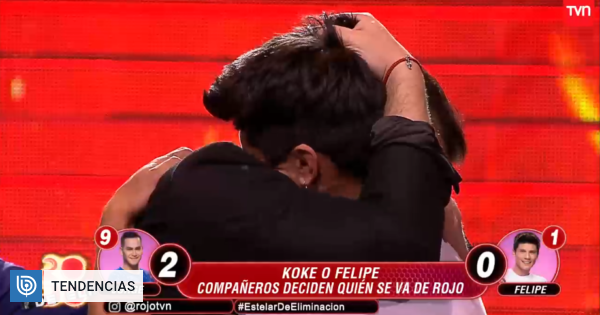 This Friday, August 17, performed the first elimination of the program Red in primetime (22:30), in which the singer left the contest Felipe Galindo and the dancer Juan Francisco Matamala

In the first place, the competition of singers was developed. In this decisive stage Carla Costa came Jorge Núñez and Galindo himself. After the three presentations were developed, the jury decided that the interpreter should stay in the program for another week.

With this, the two men reached the elimination line, an instance where the teammates decide which competitor in the program continues to compete

In this way Núñez received the votes of Juan Ángel Mallorca, Jeimy Espinoza and Andrei Hadler; leaving the young man alone, resident of the municipality of Pedro Aguirre Cerda, in the other sector.

After the three presentations were the four members of the group who had to fight to stay in the talent program, Red defined that Arcil was the one who stayed behind for another week, causing Hernandez and Matamala stayed behind in the elimination row.

In the latter case, after a split vote was held ] Nicole Hernández received three votes of support and left "Juanfra", who resigned her resignation. "

" Thank you very much Rojo I am leaving but I keep dancing, this is not the end They will continue to know everyone, thanks to everyone, "said the dancer the moment he said goodbye.

This new broadcast of the talent program became a trend on the night of Friday As expected not all viewers agreed with the decisions of the artists and the jury.

Crazy, they claim, if you're talented, you have to go Felipe, it's the weakest vocal, no matter how Koke falls. #EstelarDeEliminacion

#EstelarDeEliminacion That anger Yes, it may be true that Felipe is not the best singer, but Coca-Cola is not better than he, in fact, today he sang terribly, he had a big turn On the contrary, he was not superior to Felipe! Jeimy must be in line with Coca-Cola! I am indignant 😡😭

Patuda Jeimy says that every detail is important in the competition. And its detail two weeks without a voice 😑 ridiculous po daughter! #EstelarDeEliminacion

Why are you so angry with Andrei, if you have voted professionally this time. Koke did better than Felipe. #EstelarDeEliminacion

I think Felipe did the bacan today, compared to the other presentations # EstelarDeEliminación

They cried all night. In the final they make a massive suicide. #EstelarDeEliminacion

Pause for the voice of Geraldine to vote for Juanfra and extend the program (Because Nicole has the voice of Julio and Matias) #estelardeeliminacion pic.twitter.com/LOBOM9xcn3

Not because juanfra has called to dance with Luis Fonsi they will eliminate him, on the contrary he must stay … #EstelarDeEliminacion

#EstelarDeEliminacion They are cruel and leave the Mati of the last so that the I got mad at him, Fuerza Matias, the thing is complicated ❤

#EstelarDeEliminacion That is ugly what Matias did. From very bad bad taste … To do that I went to the line of JuanFra and finally to Nicole …

I think it's Honest to the performance of Álvaro, I am impressed by his affection, closeness, empathy, affection, respect and delicacy in dealing with the participants, their families, etc. He is a great person and a great professional. #EstelarDeEliminacion