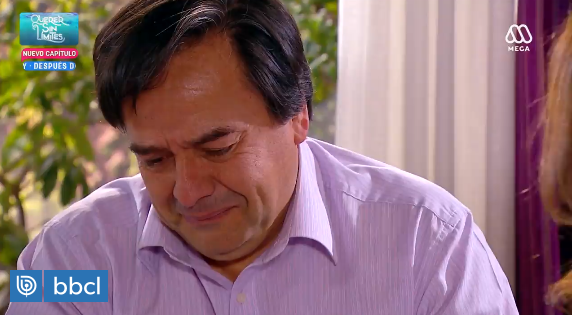 This Thursday were the followers of When I was rich they saw one of the most exciting episodes of the last time.

It turns out that the compadre Inostroza went to his house to speak and speak to Julia at that time Nelson Peña's wife asked him directly if he was gay.

It all went well: Tomás discovered Amelia and followers of Hidden Truths were stunned

Go to the article

Finally, in the presence of her friend, she confessed the truth and revealed her 40-year-old hard testimony to hide her sexual orientation.

"I must have been about 13 years old, entered the first half, all my classmates were crazy about the girls, who first polished, who gave the first kiss, spied on them the locker rooms … and how I would not walk in? How could I not like a girl if they were all around it? How could I be different? I even polled with one, shabby thing, I let her suffer so much " she confessed. "Later I started I tried to pretend I had nothing, that everything that happened did not exist, it was not what I thought, I was wrong, I was ill, until I met a bigger goat and fell in love with it was … and not only I did not like girls, now I loved a man " he said.

"I grew up listening to the hole, little fletito, the colcinón, you put that in your head and you believed it … Even I started reading magazines to seek treatment I even went to the doctor to see if I could get this disease, "he said between sobs.

He never told his parents because he thought they would not understand it and that if he told them how they could throw him out of the house.

Julia supported her and told him that she would always have her and her family, although what torments Inostroza is Nelson's machismo and what his godchildren will say.

Below we show some comments that viewers expressed on the social network twitter.

#SiYoFueraRico that linda Julia with her compadre. I loved that attitude of inclusion and friendship. I would be the same.

#SiYoFueraRico I'm sorry because the compadre talks about his homosexuality 😥

#SiYoFueraRico I thought the compadre was in love with julia .. Sniff pobreito, I felt sorry for the story of the compadre! 😪

#SiYoFueraRico The first exciting scene of this

The character of Claudio Arredondo who came out of the closet for that of Mariana Loyola in # SiYoFueraRico must be one of the few good things that have been done in the 8 Mega series.

I would be so happy with a gay uncle, we would see men together and I would look for your pololo LDNSKFJS #SiYoFueraRico