It is still unknown who infected Quintero and Puchuncaví nationally 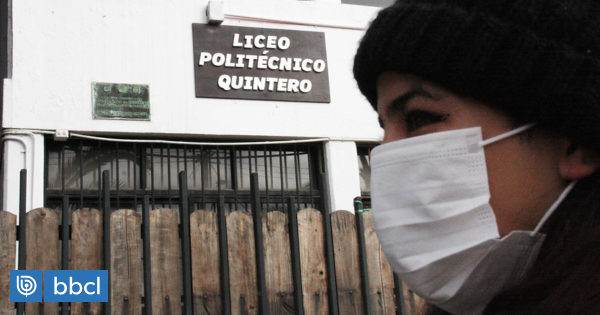 More than 130 affected people with symptoms of drunkenness has left a new episode of pollution in the municipalities of Quintero and Puchuncavíwho had to declare Yellow Alert for the sanitary emergency situation in the zone.

The authorities will continue this Friday with questions for the point of origin of toxic gas fumes and prolonged the suspension of classes, in both municipalities, for this day.

Quintero and Puchuncaví even meet with Yellow Alert for an emergency in the field of environmental hygiene.

The measure was adopted by the emergency committee that formed regional authorities with regard to this situation.

the Mayor Jorge Martínez indicated that the compounds generated by this toxic gas cloud come directly from hydrocarbons, a situation that is analyzed by the Superintendence of Health.

Precisely, this latter agency has carried out a series of inspections at companies that have been installed in the area.

The lessons remain suspended for all schools in both municipalities, at least during this Friday.

Remember that the first episode this week was on Tuesday, at least then 53 school children were struck by an unknown gas, according to the Education Seremi.

the Deputy Pablo Cabinet, from the Pollution Investigation Committee in Concón, Quintero and Puchuncaví, talked about a environmental disaster and has not excluded the possibility of temporary closure of companies in the area.

However, this Thursday there was a new incident that ended with 90 adults and 43 minors affectedespecially students.

"We have found that the symptoms can be compatible with an intoxication with sulfur oxide derivatives, which can cause nausea, vomiting, headaches and some neurological symptoms," he said. seremi de Salud, Francisco Álvarez.

President Sebastián Piñera, who visited Valparaiso, said that he & # 39; busy & worried & # 39; was about the situation.

"The ministry sent Puchuncaví a new device that allows the monitoring of 120 different gases," said the president.

The regional mayor, Jorge Martínez, was categorical in pointing out that "there will not only be a hard hand, but also a very heavy one." President Piñera has been a very clear, sustainable development, we want development, but that is sustainable and nothing can threaten the life and integrity of people. "

Neighbors expressed their dissatisfaction with what they say as the nuance of the authorities to prevent the damage caused by pollution in the population.

And although the responsibilities have not yet been determined, it is Senator Francisco Chahuán blamed National Petroleum Company (ENAP) for massive poisoning.

However, the state has excluded its participation in the emission of polluting gases in a statement. According to the company, they could not be responsible in the first place because they have no fixed sources that can cause the described effects and also because their facilities in Quintero are at low altitude, so it is impossible for gases to completely cross the bay in high concentrations. .

Other companies, such as AES and Codelco They denied that the gas leak came from their facilities.

AES Gener He assured that their operations and their control and control systems function correctly and correctly and defended that the elements that would be detected by Onemi (nitrobenzene, methylchloroform and toluene) are not used in their processes.

Meanwhile, the state copper company said in a statement that the activities of its Ventanas smelter and refinery, and that "the parameters have not been exceeded in any of the measurements and that the environmental standard has been met."