Minister Larraín: "We are ready to improve the project" 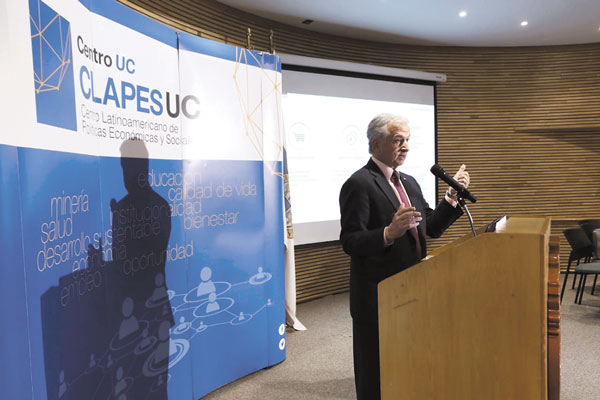 He said he expects a "better attitude" from those who "found nothing good" about the initiative.

The Finance Minister, Felipe Larraín, expressed the willingness to enter into an agreement with the opposition to carry out the tax reform project, but he called on sectors that criticize the project to be "open".

In the context of a seminar held by Clapes UC, the Secretary of State said: "We are prepared to take good ideas and I expect the same from those who say they do not like the project and do not like it".

"The project is pro-investment and pro-employment The mandate of President Sebastián Piñera is to restore growth and investment, and this project is a central tool for growth," the authority said.

The Secretary of State presented the project on Wednesday in the Finance Committee of the Chamber, which raised doubt among the members of Parliament, especially about the collection.

"The reform does not reduce the collection and does not increase it in a regime that will affect the long-term growth of the economy and we do not even consider the positive impact of economic growth on sales," he said.

In addition to being "misleading" to say that integration favors only big companies, the authority called for ideas to be proposed to improve the project.

"We are prepared to improve the project and listen to good ideas, and I hope that we are all open to this discussion: Chile needs to grow," concluded the Minister.

Larraín referred to the proposal of a number of parliamentarians about including regional revenues in the project. In this regard, the authority stated that "we are willing to analyze it in the context of budgetary responsibility, as a ministry we will be willing to listen and engage in dialogue," he said.

The head of public finances also spoke about the axis of the national treasury that the government will present later this month, noting that the priorities will be social sectors such as health and education.

"The social seal of the government president Piñera will be closely involved in the budget, this budget must be responsible and we must compensate for the largest structural deficit and the pressure of expenditure that does not have funding, it is a budget with very important challenges, "he said. Government prepares new round of project dissemination in region & # 39; s

The Vice Secretary of Finance, Francisco Moreno, met yesterday with his colleagues from the presidency and government, Claudio Alvarado and Emardo Hantelmann, to start the second phase of tax reform in regions & # 39; s .
The idea, they think, is to carry out a work in parallel with the discussion of this initiative that started this week in Congress, after the Finance Minister Felipe Larraín, on Wednesday the committee of the Chamber of the Chamber of Attended delegates. .
The secretary of the communications secretariat (Secom), Jorge Selume, also attended the meeting. And although they were not present, this group also included the secretary of Economy, Ignacio Guerrero, and the executive vice president of Corfo, Sebastián Sichel.
At the end of the meeting Moreno emphasized that the aim of this working group is to land the multiple benefits that the project brings with it.
"Just as we want to make an important contribution to the parliamentarians of our sector and to those who are in favor of modernizing our tax system, we have to work at regional level – with trade union organizations – to open the debate and a detailed analysis of the project. run, "said the lawyer.