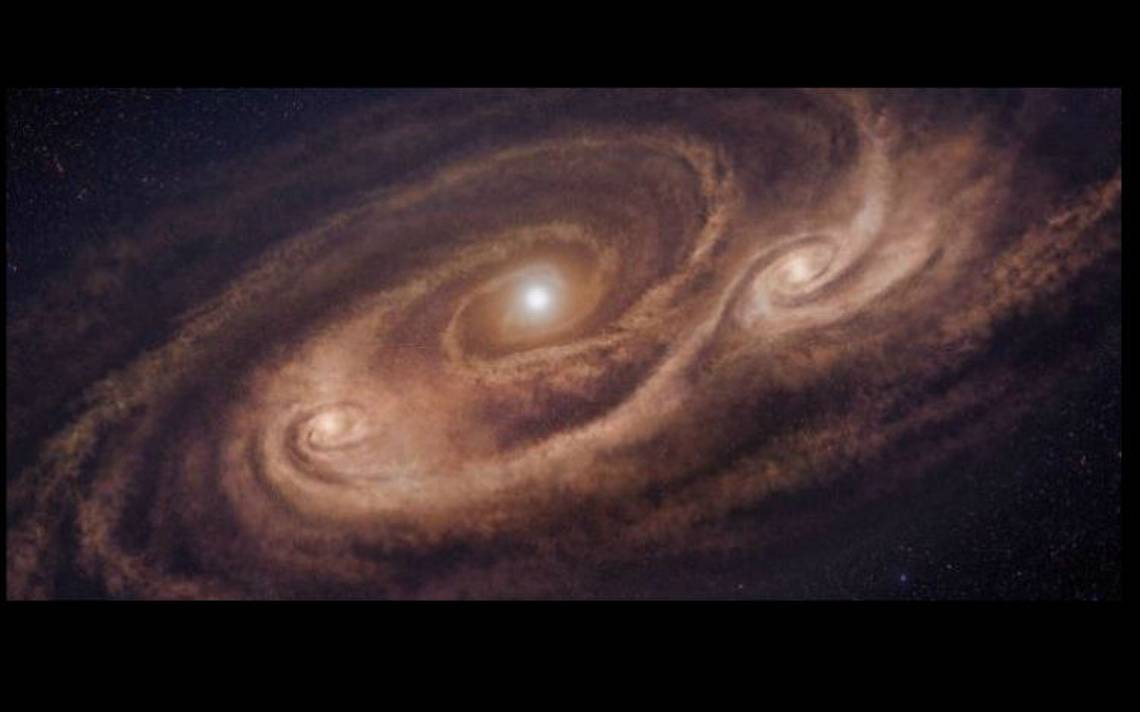 A group of astronomers worked out the most detailed anatomical atlas on the date of a
monstrous galaxy, located at 12 thousand 400 million light years.

By using the telescope
ALMA, based in Chile,
the scientists have observed that the molecular clouds of this galaxy are unstable and therefore produce stars at an unbridled pace.

It is thought that this type of galaxies are the ancestors of the elliptical systems. The finding thus helps to understand the formation and evolution of these groups of stars, nebulae, dust and gas.

Moons can live on more than 100 planets outside the system!

Monstrous galaxies, or star-forming shoots, produce stars that are 1,000 times faster than the Milky Way. To respond to this phenomenon, the main author of the article,
Ken-ichi Tadaki
, studied the galaxy COSMOS-AzTEC-1, discovered by the James Clerk Maxwell telescope on Hawaii.

Then the Large Millimeter Telescope (LMT, for its abbreviation in English)
Alfonso Serrano, in Mexico, discovered that it contained large amounts of carbon monoxide
and revealed hidden outbreaks of star formation.

The observations of the LMT also allowed to calculate the distance of the galaxy, which is 12,400 million light years.

Although the astronomers noticed that the galaxy had ingredients to form in large quantities of stars, they did not know the characteristics of the cosmic gas it contained.

For the above,
the team used the high sensitivity and resolution of ALMA to develop
r a detailed map of the distribution and movement of molecular gas in the galaxy.

Due to the broader configuration of ALMA, spread over an area of ​​16 kilometers
is the map with a higher resolution that has been obtained until the date of a monstrous galaxy of this type.

"We discovered that there are two large clouds, several thousand light years from the center, and in most galaxies with starbursts the stars are in the middle, so it is so surprising to find peripheral clouds," Tadaki said.

By studying the nature of gas
COSMOS AZTEEKS-1
, the experts saw that the clouds of the galaxy are unstable, which is rare, because in a regular way gravity is balanced inwards and outwards in the clouds.

According to the ALMA website, the gas cloud collapses when gravity is converted to centrifugal pressure to form stars at an accelerated rate.

Then stars and
supernova's at the end of their lives they throw gases, which increase the pressure outwards, whereby gravity and pressure reach an equilibrium to maintain the star formation
in a moderate rhythm; This is the process of self-regulation of star formation in galaxies.

In COSMOS-AzTEC-1, however, the pressure is weaker than gravity and the galaxy has been transformed into an unbridled star factory.

Challenge expectations! NASA discovered that carbon monoxide is in the exoplanet

They discover a huge black hole with 100 thousand times more mass than the sun!