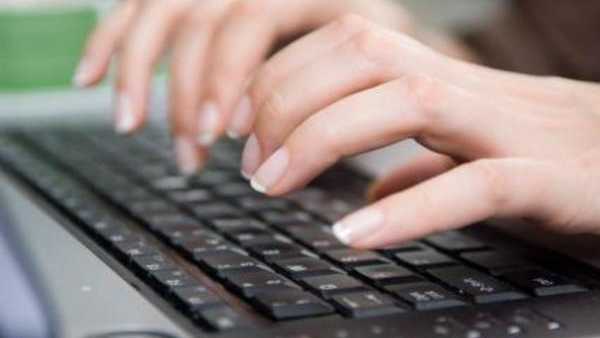 Perhaps it is something so commonplace that this height is not perceptible: two small stripes on the computer keyboard, on the letter keys "F" and "J".

What are they for? It is assumed that his function is to make writing faster and more comfortable. But how?

Most keyboards contain a relief on the F and J keys.

The type of keyboard that is mostly used in Spanish is called QWERTY and the name corresponds to the first letters that can be seen in the upper left of your keyboard: "q", "w", "e", "r", "t", "y".

This keyboard is designed by Christopher Latham Sholes, American inventor, at the end of the 19th century, so that his daughter could easily demonstrate with the prototype he had made.

With the rise of typewriters at the beginning of the 20th century, you had to learn to type quickly. And that is true typing is born. And, linked to the QWERTY keyboard, the protagonism of the letters F and J.

By placing the index fingers on it, the larger ring and small fingers can easily be placed in the following lettersrespectively F and J.

They are also located in the middle line of the keyboard so that the hands can be supported comfortably on the desk.

The stripes serve as a guide, so you do not have to look at the keyboard while typing.

In classic typing, the thumbs are used to it grab the space bar and the letters "G" and "H", which remain uncovered, can be easily operated by moving the index fingers.

The letters "F" and "J" then serve as a guide and reference point to place the hands in the position that, in theory, is considered the most comfortable and fast to write.

The stripes are used to identify them without lowering the view to the keyboard. Some computer keyboards instead of stripes have dots.

iBook with the keyboard organized according to the Dvorak format (Wikimedia)

They can no longer be seen on all keyboards

The reason is simple. Nowadays many people learn to type fast and without looking at the keyboard without taking classes typing. And also, without having it knowledge what would the correct position of the hands. The use and the exercise makes them faster.

On the other hand, the QWERTY keyboard can be lose his government. Designed for manual typewriters, for computers other designs appeared such as DVORAK that they have more and more computers and that they promise, as QWERTY did at the end of the 19th century, to write faster and reduce the chance of errors.