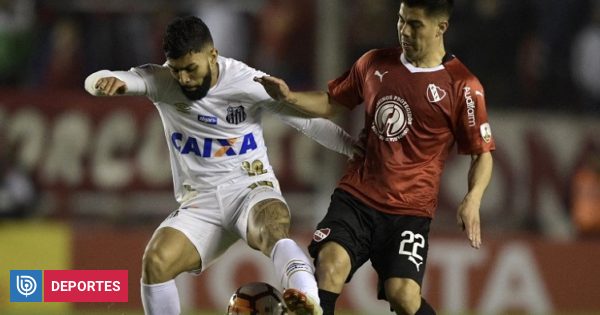 The Brazilian Santos and the Argentine Independent they will leave the skin on Tuesday in Sao Paulo looking for a place in the quarter finals of the Copa Libertadores.

The winner of this series will have an Argentine rival in the next phase, which will be won by River Plate and Racing.

The game will be played in the Pacaembú stadium, in a scheduled game from 19.30

A draw or victory in Argentina in the first leg?

The first stage ended in a tie and without goals, but the Argentines claimed the three points for the Conmebol for a supposed poor recording of the Uruguayan player Carlos Sanchez in Santos.

According to Independiente, the midfielder had to pick one of the three suspension dates in Conmebol tournaments he had against him, something that Santos denies.

The Conmebol should take a decision this Monday one day before the match. If he gives the reason to the Argentines, the result of the first stage would be 3-0, and then the Brazilians would have it uphill to reach quarters. So far there is no confirmation.

"We have to worry about the field. I do not like legal issues, the suit and tie do not go with me anymore, "he said. Cuca, the coach of Santos.

Independiente is the team with the most Libertadores titles, seven, while Santos, the legendary Pelé team, has three.

After defeating the bay in the local championship, where he has a mediocre performance, Santos stands for a very low defense this crucial game, which will be played under the baton of the Chilean Julio Bascuñán and his compatriots Carlos Astroza and Claudio Ríos.

The left side Dodo and the central Luiz Felipe are safely low, the first by ejection in the first stage and the second by an injury to the left thigh.

It is also doubt Gustavo Henrique, who sustained a head injury in the game against Bahia, and deputy goalkeeper Vladimir is also on the weak rope for muscle discomfort.

So things, Cuca will have to use other options to defend 0-0 now.

The Argentines arrive after two games without scoring in Brazil, something that worries them, and a more than bad performance in the Super League, where they put 23 out of 26. Last Friday they lost at home with Defensa y Justicia.

"If we have five scoring opportunities and we do not convert, it is difficult to be competitive," said coach Ariel Holan after the game.

"We have to throw ourselves faster to have more situations, lacking clarity in the last meters," said foreman Emmanuel Gigliotti.