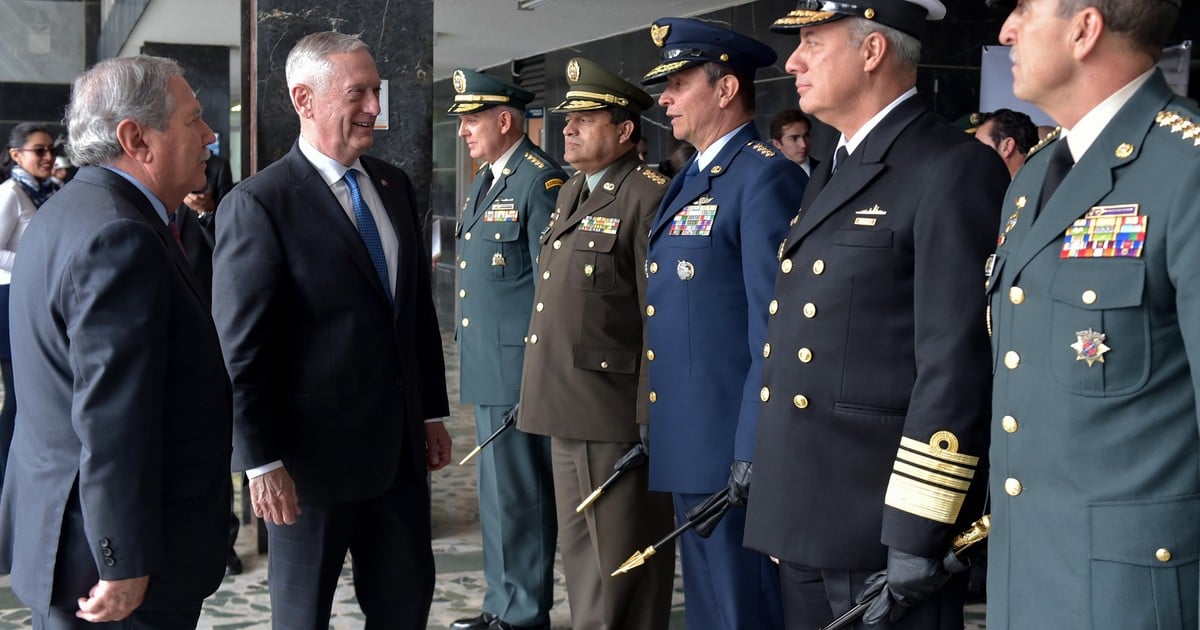 A dozen operating theaters, a thousand beds, diagnostic equipment and hundreds of doctors, nurses and technicians: the United States is sending a naval hospital from the Navy to the coasts of Colombia until to help alleviate the humanitarian tragedy of Venezuelans flee their country and settle in Colombian territory.

The decision was taken within the framework of the visit of the US Secretary of Defense, James Mattis, to Bogota, after a breakfast this Friday. He held the official in the house of government with the new Colombian president, Ivan Duque. The head of the Pentagon culminated in South America on Friday in Colombia, including stops in Brasilia, Rio de Janeiro, Buenos Aires and Santiago.

The novelty was distributed among journalists traveling with the US official, including Clarín . "We are working on the details," said Mattis. And he stressed that "is an absolute humanitarian mission We do not send soldiers, we send doctors, it is an attempt to stop the human costs of the increasingly isolated Maduro regime."

The US official, a 68-year-old retired Marine, said that President Duque fully agreed with the decision. "They walk across the border," he said. "We know that you can not add a million people to the health system of a country without a problem," said the head of the Pentagon. "It's a very serious problem and a very specific way to help our neighbors, it's time that when a democracy is in trouble, we're going out to help it."

The United States has two hospital ships, Mercy and Comfort, with similar characteristics. They measure about 272 meters long (length) and 32 in width (sleeve) and move at a speed of 17.5 knots. It can have 65 marine officers from the government and 1215 members of the maritime and civil medical staff on board, who could come from different countries, including Argentina.

The ship, which would be in a Colombian port with a not yet determined date It is designed to provide emergency assistance to American fighters who are in the war zone, but also provides hospital services for natural disasters or humanitarian operations around the world . The Comfort was in Puerto Rico last year, for example, to help the victims of Hurricane Maria.

On board have 12 operating theaters, 1,000 beds, digital diagnostic service, a medical laboratory, pharmacy, ] optometry and two oxygen production facilities. They have a special job so that a large-scale military helicopter can land.

The Comfort is now moored in Norfolk, Virginia. The Mercy in San Diego, California. Both have a minimal endowment, but can prepare for sailing with the crew and complete equipment in five days. It is not the first time that such a ship arrives in Colombia. The Comfort was stationed in the Colombian Pacific coast, in 2015, to provide sanitation assistance to the population of Buenaventura. Probably this time it will be installed on the shores of the Caribbean, closer to the border with Venezuela.

The shipment of this ship will alleviate the delicate situation of the Colombian health services, which have collapsed by the arrival of more of a million refugees who have escaped the Venezuelan crisis. The issue, which pertains to the United States, was raised by Mattis in all the countries he visited during his trip. The problem inevitably arose in Brazil – which also has a border with Venezuela – Chile and Argentina, where tens of thousands of people have also arrived who escape the Nicolás Maduro regime.

At the meeting that Mattis had with Defense Minister Oscar Aguad, on Wednesday in Buenos Aires, talked about the consensus that exists on the solution of the Venezuelan crisis must be political and non-military, and the need to send humanitarian aid .

So far, the United States has confined itself to applying sanctions for officials of the Maduro regime and freezing their assets and accounts in the US banking system. The sending of humanitarian aid is a gesture to Colombia, but also to the Venezuelan people. The issue could aggravate the accusations of the Venezuelan president, which could argue that the military ship poses a threat to the sovereignty of Caracas, an intervention attempt or the like. But the United States is accustomed to the statements of Maduro and – Mattis was clear – he will not pay any attention to his words.

The only one in Bogotá was the last stop in the South American tour of the Pentagon, which returned with its entourage to Washington & # 39; s night.