The car market is picking up, new energy vehicles are facing "shuffle" – Zhongxin.com

The car market has been picked up. New energy vehicles are confronted with "shuffle"
from 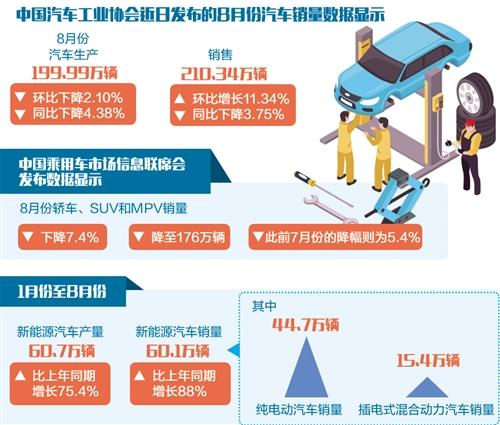 In the second quarter of this year, due to factors such as high temperatures, commercial frictions and high stock levels, car sales remained weak and the car market gradually became cold. Industry experts, however, believe that the unfavorable factors are gradually disappearing and that the car market will gradually rise in September and October as the traditional sales season. In addition, new energy vehicles continue to maintain rapid development and product differentiation gradually comes into being. It is expected that after the withdrawal of the subsidy in 2020, the concentration of the new energy vehicles will be improved and that the production companies for entire vehicles will be concentrated within 10 companies –

On the basis of the data, car production declined in August and the sales volume increased rapidly, while the production and sales volume decreased slightly. From January to August, car production and sales remained limited, and growth showed a certain downward trend compared to the previous seven months. The data released by the China Passenger Car Market Information Association seem to be quite serious. In August, car sales, SUV & # 39; s and MPV & # 39; s dropped by 7.4% to 1.76 million units, after a decrease of 5.4% in July.

Cui Dongshu, secretary general of the association, said that in the near future consumers will have become more cautious about consuming large parts. "The winter of the Chinese car market is coming and the demand for SUVs can continue to fall throughout the year."

There are different voices in the industry for the idea that "the winter is coming". Zhou Yi, assistant researcher at the development department of the Council of State Development Research Center, told the Economic Daily that the production and sales figures for cars in August amount to 105.2%, firstly due to the high stock volume of the past month, the production rate slowed and secondly, due to seasonal factors, sales started to reverse. good.

"In August, car sales figures showed double-digit growth for the first time in a few months of decline, indicating that the market started to recover." Zhou Yi said that the main reason is that the adverse factors affecting sales have in principle been eliminated, and weather factors have increased sales. The conditions are expected to grow well over the next two months.

"The weak sales in the second quarter made the phenomenon of car promotion more common, which resulted in lower general consumption and limited economic driving." Zhou Yi said that the development of the auto industry with the escalation of Sino-US trade frictions has great uncertainties. In the future, the automotive industry will still face challenges in its role in the economy.

As the data show, the total sales volume of new energy vehicles has maintained a steady growth trend compared to the same period of the previous year. The growth of plug-in hybrid vehicles is still high and gradually seizes the market share of pure electric vehicles.

Shi Jianhua, deputy secretary general of the China Automobile Association, said the forecast of the association for the sale of new energy vehicles this year is more than 1 million vehicles. It could be achieved right now, and some people believe that sales could reach 1.5 million vehicles this year. Come, 1 million, 1.1 million, or even 1.5 million, the difference is not big, because the share of new energy vehicles in the entire automotive market is still small.

"The differentiation of the new energy car industry will inevitably accelerate under the influence of many parties." Zhou Yi said that the Ministry of Industry and Information Technology is no longer specialized in the production of 30 new companies (the first batch) of new energy vehicles for a period of 12 months or more. The qualification of the production of new energy vehicles was withdrawn. This means that the era of barbarisation in the new energy car industry is over, the future market rules and clearance will further accelerate the differentiation of car companies: it is expected that new manufacturers of energy vehicles will be concentrated in 10 companies after the subsidy closure in 2020.

"In the huge automobile industry, 4S stores are the most important part of the sales repurchase, due to the current oversupply of the market, sales at the dealers' single stores are low and the gross profit is low, especially in the new energy market. Stage. "Li Jinyong, chairman of the Zhonghai Tongchuang Group, pointed out that as China's car market changes from the seller's market to the buyer's market, the profitability of most 4S stores is steadily decreasing, and the profit from car sales is increasingly diluting, mainly depending on maintenance and other derivatives. Business profitability. At the new energy vehicle management level, if the traditional 4S retail model is used, it will be even more difficult to achieve sustainable profitability. Under these circumstances, car companies have to break through the thinking limitations of traditional 4S stores, enter the shopping mall, build experience stores, use internet thinking, etc., based on tradition and upgrade tradition.

According to Cui Dongshu, the 4S shop system was always regarded as a better model in the traditional sales market for fuel vehicles, but due to the complete change of the new energy vehicle energy system maintenance in the later phase is greatly reduced, so the after-sales service of the traditional car 4S store in the new phase The function has weakened considerably. He said that in the future, 4S stores will become a system that concentrates on sales display and promotion services, and will weaken the function of customer service.

"This kind of transformation is a huge project, it can not be done overnight, it takes at least 3 to 5 years of transition time." Cui Dongshu believes that if the after-sales function is greatly reduced, the operational efficiency of 4S stores will significantly decrease. Therefore, the costs for changing the sales model and the layout mode of the existing 4S stores are still high and the future 4S stores will be dominated by small models for direct store display.