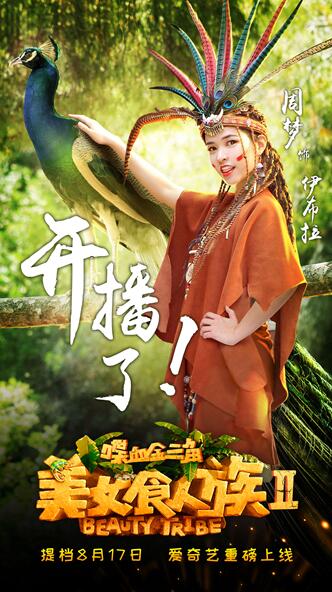 Directed by director He Jia-nan, Zhou Meng, Li Yuyang, Jin Song and other actors starring the film "Beauty Cannibalism 2 Blood Golden Triangle" was officially launched. Zhou Meng, a Cool Entertainment artist, plays a tribal queen Ibra, who is a high-class, cheerful and beautiful woman. Around the conflict between primitive tribes and the conflicts of modern society, a war between the cannibals and the transnational drug gangs is on the brink!

The character played by Zhou Meng is the 18th generation queen of the Molda tribe, and also a spiritual leader, a strong woman with tremendous determination.
The action scene of "Dating Girl" Zhou Meng is even more exciting. Besides the action, the power and the rhythm are also required, very beautiful. With a few martial arts skills of the same age, Zhou Meng has more possibilities in performance. There is no need to substitute for a play in the film. For Zhou Meng: "The game is bigger than the sky, all challenges are worth the game." Her contribution not only produced a good show, but also won the public's praise.

Filming this film is to make a more realistic film and to photograph in the pristine forests of Yunnan. It is also only in the summer and the climate is very hot. The changing weather and the proximity of the original surroundings also make shooting more difficult. The queen of the tribe played by Zhou Meng must be more comfortable in such an environment. The complex clothing is more insecure in the body and the various types of forest make There is a certain danger in the environment: Zhou Meng has to stay in the air for a long time but she has never complained, but she can say she is pretty dedicated.

It is reported that the film "Detective Yao Jiesi" starring Zhou Meng, the magic blockbuster "Magic Pirate White Bone", the TV series "Hibiscus Xiyue Jinxiu", also gradually starts, in the expectation that this " post-96 "girl with more extraordinary skills will bring Give us even more wonderful interpretations of different types of characters!