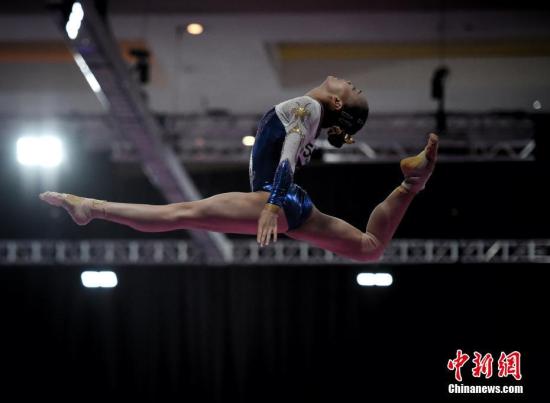 China News Service, Jakarta, August 24 (Reporter Xing Wei) The Jakarta Asian Games Gymnastics Competition ended at sunset and the Chinese team won not only four gold medals for men and women groups and individuals, but also men's rings, parallel bars and unequal bars for women, balance beam. The project is financed. Ye Zhennan, the leader of the Chinese gymnastics team, said that although the results of the eight gold medals were not enough, they essentially achieved the goal of the training team.

On 24 August the balance sheet of the Asian Games in the gymnastics took place. The Chinese team Chen Yile and Zhang Hao were on the shortlist and in the end Chen Yile won the championship with a strong score of 14,600 points. The image shows Chen Yile in the game. China News Agency reporter Li Yuyun photo

Ye Zhennan also said that the opponents of the Chinese team in these Asian Games are relatively weak, but mainly because they compare themselves with themselves and play their own level. "Many athletes participate for the first time in international sports games such as the Asian Games, but we have not reduced the difficulty level due to weak opponents, the success rate has also improved considerably compared to previous years."

The Chinese men's team of the Asian Games in Jakarta successfully won "revenge" with a total score of 260.95 points and a 12.40 points lead for the Japanese team. In the individual all-round project of the men, Lin Chaopan and Xiao Ruoteng won the championship.

It is noteworthy that, because of the main preparations for the World Championships, the Japanese team of the Asian Games sent only two teams to participate in the war. In the gymnastics project for men only 3 silver and 1 bronze were won. The overall strength is clearly not comparable with the Chinese team.

Ye Zhennan said that the performance of the men's team at these Asian Games has advantages, but there are also many shortcomings. "There are weak points, the stability of the landing has to be improved and the quality has to be polished."

<img style = "max-width: 500px" src = "http://n.sinaimg.cn/translate/83/w333h550/20180825/Pykw-hicsiaw6882379.jpg" title = "August 23, Jakarta Asian Games In the final of the gymnastics ring for men won the Chinese player Deng Shudi the championship with 14.750 points, and the Japanese player Noguchi Nogami and the Chinese Taipei player Chen Zhiyu won two or three, in the picture Deng Shudi can be seen in the game.from

On the evening of August 23, the number two of the gymnastics ring for men at the Asian Games in Jakarta, the Chinese athlete Deng Shudi won the championship with 14.750 points and the Japanese player Noguchi Noguchi and the Chenesji player Chen Zhiyu won two or tree. The photo shows Deng Shudi in the game. China News Agency reporter Hou Yu photo

According to Ye Zhennan, the preparations of the current men's team for the Olympic Games in Tokyo have basically taken shape, the next task is to break the team, to improve the will and to build a decisive iron army. "We need to think more about the difficulties, how can we compare in the leading situation? How do we have to hunt for the backward situation? In this respect, players need to practice more and participate in international competitions such as the Asian Games."

The ladies team that went this time sent a "00 after" teenager. Before the game they worried about the lack of experience in the competition, they won the championship at 165.250 points in the team competition and gained 12 consecutive championships in the gymnastics team Women's psychiatric games In the all-round ladies Chen Yile and Luo Huan won the championship with 55.950 points and 54,550 points. runner-up.

According to Ye Zhennan, however, the current Chinese women's team is not uniform and suffered injuries in the balance of the balance beam, floor exercise and jumping strength of the Li Qi Asian Games training, but also a heavy & # 39 ;. "Then we will have difficulties in the vaulting and floor exercise of women, and a group of teenagers in 2003 and 2004 will also participate and increase the team size."

Ye Zhennan also said that after the new coach of the women's team, Qiao Liang, joined the team at the beginning of the year, the training concept of the team has changed a lot and the training intensity and density have also improved. "He brought the concept of" happy gymnastics "and let the children laugh and won the gold medal, the spirit of the team is very good."

The Chinese gymnastics team met Waterloo at the Rio Olympics and only two bronze medals for men and women were included. Looking back on that experience, Ye Zhennan said there were a number of problems with the training, status and control of the team on site. "If a team does not have the strength, there is no reserve power and the training of all-round players, it is difficult to adjust it in the short term."

Ye Zhennan said that the rise of Chinese gymnastics is not a slogan, but that it is necessary to do a good job in team allocation and team building. At the moment the whole team is working hard in this direction.