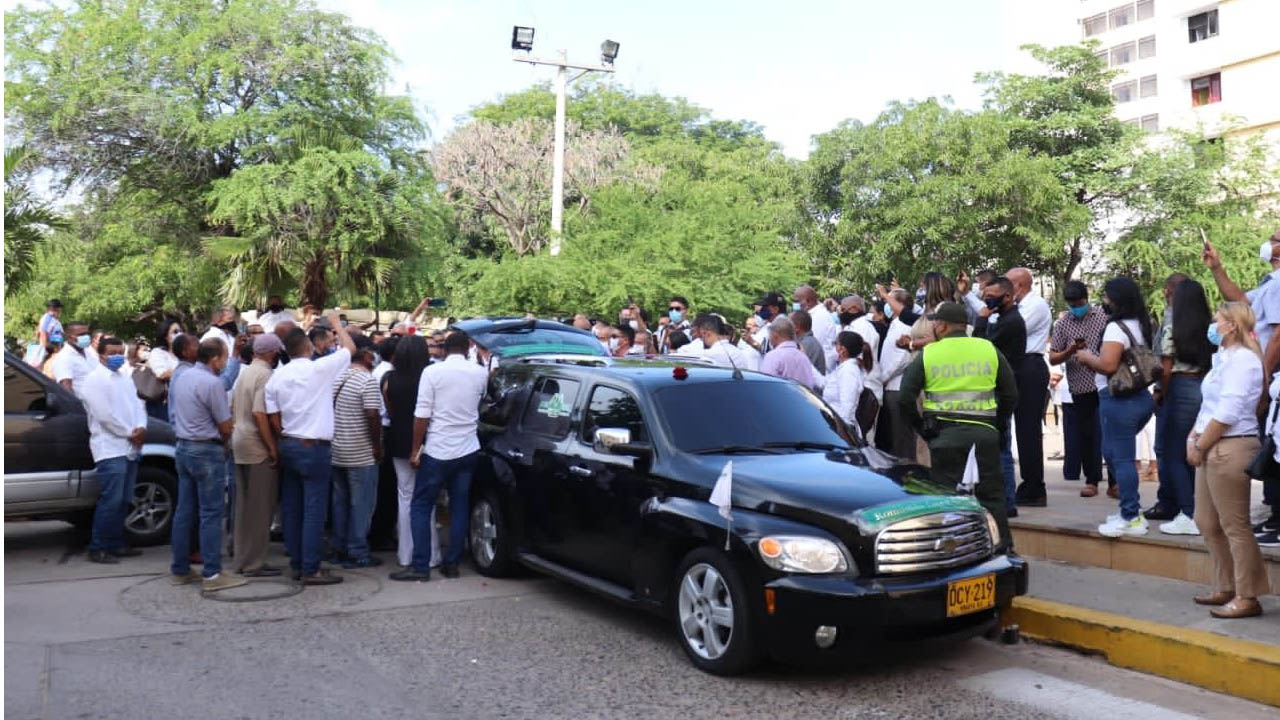 Before being buried in his native Riohacha, the singer-songwriter of Vallenata music Romualdo Brito was the object of various tributes by artists, cultists, authorities and followers of his songs.

The body of the artist, who died in a road accident in Cesar, arrived Saturday evening in the capital of Guajira and toured the main streets, with a stop at the Francisco El Hombre roundabout, where his daughter Leisby Brito Guerra sang his favorite song from his father The most beautiful thing in the world (My old dear), a theme popularized by Beto Zabaleta.

He did so amid tears and the support of hundreds of people who gathered to fire the author, who was veiled in a burning room of the Almirante Padilla Educational Institution.

There, his daughter Leisby asked not to mourn him, but to remember him through his songs. “My father was a man with a smile, fortunately, so now I ask you not to cry for him anymore, I tell my uncles not to cry, to sing,” he said.

She added, “I used to dance to my dad’s songs and now I want to dance, I can’t feel sad when I had a great dad and I’m proud of him.”

On Sunday morning, a mass was held in honor of the singer-songwriter at the Nuestra Señora de los Remedios Cathedral with the presence of the Governor Nemesio Roys Garzón and the Riohacha Mayor José Ramiro Bermúdez.

“We posthumously pay tribute to the work and memory of the teacher Romualdo Brito López, as a tribute of admiration and recognition for his valuable contribution to the culture of La Guajira. Our condolences and solidarity with his whole family ”.

The mayor for his part said: “We Colombians weep in pain at the departure of teacher Romualdo Brito, we ask God to let him sing and fill the heavens with joy, that we will remember him here on earth too, joyfully, happy and in love ”.

At the exit of the cathedral, many people waited to say goodbye to the author of 1,400 Vallenato songs. Artists, singers, and spontaneous singers voiced their songs amid grief and paid homage to him before burial.

During his journey from Valledupar to Riohacha, every congregation in the south of La Guajira said goodbye to him with their music.

In Fonseca, Villanueva, Barrancas, Urumita, and other towns, his followers sang and wept as the caravan that accompanied Romualdo’s chest passed by.

During the concert he gave from the Guatapurí River, in Valledupar, Silvestre Dangond paid tribute to the singer-songwriter Romualdo Brito. He did it when he sang with accordionist Rolando Ochoa. For this he performed Los amaneceres del Valle, a song that Brito gave to Jorge Oñate to make it a classic. Immediately afterwards, the urumitero sang La defunta, a song written by Brito and recorded with Ochoa. “People have not seen the greatness of Romualdo, one of the three greatest composers has left us. In my opinion there is first Calixto Ochoa, father of my friend Rolando, then Romualdo and then Omar Geles. The teacher was measured to compose whatever it was, he had no set style, may God have it in his holy glory, ‘the artist said near the end of his presentation, which was followed by nearly thousands of people.