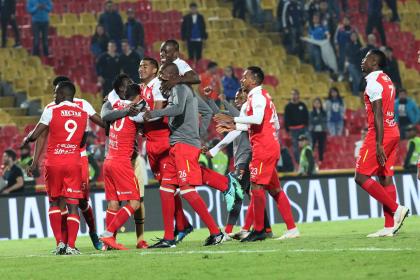 Independiente Santa Fe announced Christmas for its fans and announced last Thursday more players who will join the team for the 2019 campaign. Three players joined Fáiner Torijano and Yonatan Murillo, who were published in the last few days.

The area where red has the most incorporations is in the defense. The hiring of Martín Payares has been added to the two aforementioned players

However, the best news for fans of red came in the middle of the field. Finally, the return of Ómar Pérez, the idol of the past years on campus, was announced. Mateo Cardona was also confirmed as a new club player for the next season after an international tour of little success.

Santa Fe is still looking for the goalkeeper for 2019. José Fernando Cuadrado is still the man they strive for, although there are other options inside and outside the country.

In addition, in a dialogue with & # 39; In La Jugada & # 39 ;, & RCN Radio & # 39 ;, President Juan Andrés Carreño pointed out that the arrival of Leonardo Castro (a Colombian footballer who is in South Africa ) is an option, but he has not yet been hired.

The red president also confirmed that the possibility is open for players to leave. Wilson Morelo, Yeison Gordillo, Juan Daniel Roa and Baldomero Perlaza are not non-transferable and, if they arrive, the offers will be heard.