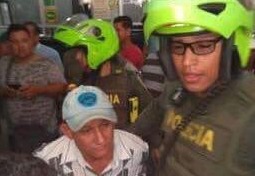 After the deployment of an operation, the national police found and rescued in the transport terminal of the municipality of Puerto Berrío to the girl, eight years old, who was kidnapped in Maceo, in Magdalena Medio Antioquia.

The minor was kidnapped at the door of his school on the path La Floresta by a man of 42 yearswho was captured when he owned it in another congregation.

According to the testimonies of two classmates, the subject passed on a motorcycle and told the three that would bring them to the educational center. Upon arrival he only allowed them to come to them and took the girl in a different way.

That is why the authorities developed a "padlock plan" across the region, that the identification of the minor was reached by a citizen with the help of the photo that was distributed in the media who noticed the uniformed, as confirmed by Colonel Carlos Mauricio Sierra, commander of the Antioquia police.

"What we did was that both the police of Antioquia and the Magdalena Medio have made a plan padlock, and also thanks to all the cooperation of the media, this girl was found in the transport terminal. That is where the community realized that this girl was lost, "the official added.

According to the preliminary investigations, the alleged kidnapper would take the girl away of the department of Antioquia and apparently transfer to a municipality of Santander.

The captured must answer for the crimes of simple kidnapping for a Middle Magdalena Court Antioqueño.