Colombia goes out to vote to overcome abstinence! 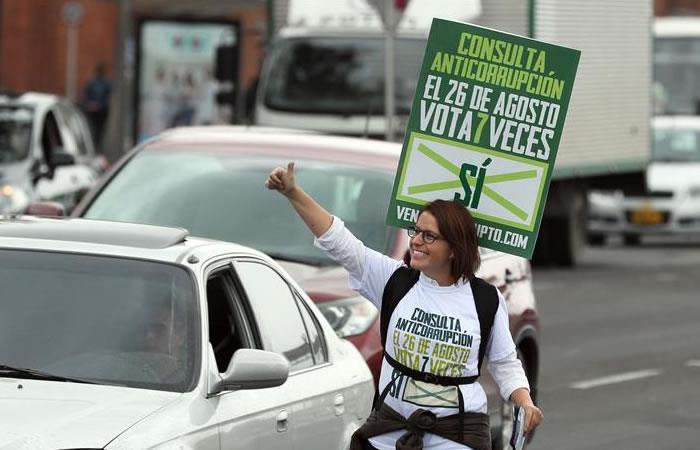 In order for the initiative to be valid, more than 12.1 million people must vote, or a third of the electoral count.

It may interest you: Yes, there will be a dry law for the Anti-Corruption Consultation.

According to the former vice-presidential candidate and ex-senator Claudia Lopez, one of the main promoters of the consultation, the goal is to send "a clear message" to the politicians of the country.

"This is a civic cause, it is a cause of the country, tomorrow we Colombians will not vote for a person or for a party, but for giving a clear message and a clear mandate to the political class they have to resolving and Congress to "approve" these seven anti-corruption mandates in up to one year in the consultation, emphasized López, who is part of the Green Alliance.

The anti-corruption consultation contains seven questions, each with the options "yes" or "no".

One of the topics to be consulted is the reduction of the salary for the congressmen and officials who earn more than 25 legal minimum salaries and the possibility of imprisonment for the corrupt, and forbid them to enter into a contract with the state again.

Lopez stated that in case of winning the "yes" and exceeding the threshold of votes, the Congress has one year to approve the seven standards "or else, after the year, the president authorizes to implement these rules. to issue by decree. "

That is why she trusted that they would exceed the threshold of 12.1 million votes and noted that the promoters were "very happy" because they saw how "a civilian wave was formed" to support anti-corruption measures, "that it was where it went over. "

The promoter of the initiative called for voting against those who supported Ivan Duque in the last presidential elections despite the fact that the current head of state is part of the right-wing Democratic Center, whose ideological standpoints are far removed from those of the Green Alliance.

The national registrar, Juan Carlos Galindo, said that "every detail was checked to ensure that Colombians have an agile and efficient process, especially transparent."

Similarly, an international observer mission was installed for consultation, which will have 40 observers.

The big challenge will be to overcome the threshold of voting in a traditional non-presidential country.