Six suspects were responsible for sending marijuana to Ecuador Colombia 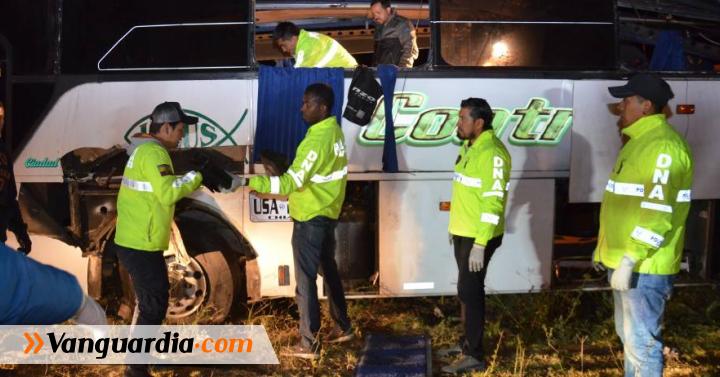 & # 39; Los Mercaderes de la Frontera & # 39; is the criminal gang that, according to the prosecution, is linked to the shipment of more than half a ton of marijuana to Ecuador and camouflaged in the bus that crashed on August 14, where they live 24 people, between Colombians and Venezuelans.

After the investigation, members of the CTI of the Public Prosecution Service arrested six suspected members of the criminal organization, three in detention and three in flagrant delicto.

Among the prisoners are Juan Gabriel Céspedes González, who apparently is the leading supplier of drug traffickers in the Valley, Risaralda and Caquetá; Jairo Espinosa Méndez, who was the main supplier in Ibagué; Luis Alejandro Espinosa Mora, who apparently is the man of trust of Jairo Espinosa and distributor of the pots & # 39; Ana Lucía Salamanca Mendieta, who was a vending machine; Lina Jimena Pinzón Cárdenas, the wife of Jairo Espinosa and distributor of the anesthetic; and Erika Tatiana Nieto, who, according to the authorities, had the task of dividing the psychoactive substance.

The State Attorney General of the Nation, Néstor Humberto Martínez, announced that the appeals before the courts in the context of the investigations carried out together with a group of anti-narcotics, since July 2017, because of a complaint filed for a community action in Ibagué.

According to the accused body, the criminal structure was dedicated to the wholesale trade in drug trafficking in various municipalities of Tolima, Huila and Valle del Cauca. They would also have links with organizations that commit crimes in Ecuador and Chile.

"The evidence gathered by the prosecution, such as interceptions and follow-ups, makes it possible to establish that the gang that brought coca and marijuana" spookily "on the market had a functional structure for dosing and distributing of hallucinogens, which it collected in a clandestine laboratory in the city, Warsaw district of Ibague, "said the prosecutor.

According to the prosecutor's office, the investigation also clarified the way in which the so-called "narcotics" have been criminalized, "since Juan Gabriel Céspedes, along with Capos of Pereira, Cali and Caquetá, was members of the criminal organization".

For the prosecutor, Céspedes would be the one who had coordinated the operation a month ago to send marijuana loaded from Cali to Ecuador and whose final destination was Chile, where he wanted to sell it for a higher value than what is sold on the national territory.

"As it was observed, the modality of imitating drug shipments in buses that gave the impression of a tourist service such as the accident in Ecuador did not happen, it is a continuing criminal undertaking," said the prosecutor.

The authorities added that the criminal organization had already passed on a cargo comparable to that in August, but these events took place in 2017. The report of the Public Prosecutor's Office is that at the time the same route was taken as that which was taken days ago. was taken in which the traffic accident was recorded.

The Foreign Minister, Carlos Holmes Trujillo, reported that "since the accident in Ecuador was known, where unfortunately 15 connationals died and 13 were injured, the full diplomatic and consular team of Colombia in Ecuador did a detailed follow-up of the situation to contribute to the quick solution ".

"I had the opportunity to receive them in person, I explained the situation and they traveled again to the capital of Valle del Cauca, to meet with the Director of Consular Affairs," said the Chancellor.

The Director of Consular Affairs, Margarita Manjarrez Herrera, explained from Cali that the ministry "facilitates the process of repatriation of the remains of their loved ones and the wounded, and that therefore it exempted the issuing of paperwork and apostille to deliver all required to complete documents as quickly as possible ".

Manjarrez also explained that it is estimated that today or tomorrow, in coordination with the Colombian Air Force, "the mortal remains of the nationals will return to Colombia as soon as the necessary documents for the transfer have been issued."