How long would it take to cross the Milky Way from start to finish? | news 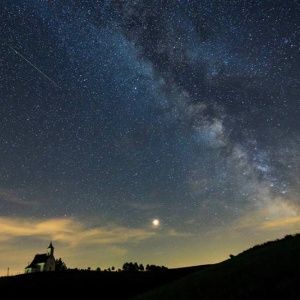 A new study conducted by scientists of the Institute of Astrophysics of the Canary Islands (Spain) in collaboration with experts from National astronomical observatories of China (NAOC) have determined that if you have the Milky WayIt would last from start to finish 200,000 light years.

An article published in Astronomy & Astrophysics notes that as instruments and techniques have been perfected, our Milky Way it has grown: first, 100,000 light years, then 160,000 and now the new record 200,000.

In addition, the research showed that there can be other stars that quadruple the separation distance between the sun and the center.

For this new study, experts in the field relied on data from the galactic evolution experiment of Apogee and the Lamost spectroscopic telescope, allowing us to know the elements in a star.

>> Great discoveries thanks to the LAMOST telescope

the galaxies spirals, such as the Milky Way, are characterized by a disc of small thickness where most stars are; they have a limited size and from a certain distance we can hardly find any stars anymore.

It is not the first time that experts measure distances at different astronomical scales, from us Solar system to the universal plane.

>> Megatelescopio achieves milestone: portrait of the center of the Melkweg

In the seventeenth century Galileo was the first astronomer to carry out the calculations, later in the 1870s William Herschel, the discoverer of Uranus, started the first quantitative analysis of the structure of the Milky Way.

Last year, astronomer of the National Astronomical Observatory (OAN), Liu Chao counted the stars at the edge of the Universe using data from the Large Space Fiber Space Multispectral Spectroscopic Telescope (LAMOST) and drew a sample from the outer ring of the flat from the galaxy