Jaguar will offer an E-Type conversion for an electric car 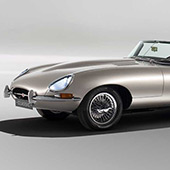 With the electric Jaguar E-Type we do not see it for the first time. Prince Harry and Meghan Markle arrived at the Royal Wedding, another concept was then introduced to the Monterey Car Week in the US, but we could already see it at the Jaguar Land Rover Tech Fest in September 2017. It is closer to the real car. Jaguar has decided to allow E-Type owners to rebuild this legendary electric car. For many, it may sound like a craziness to destroy the classic, but according to the manufacturer, the concept has received a very positive response. This renovation will be available from 2020 and Concept Zero, which is now being re-shown, will be slightly overhauled. The final version will be different. The car gets the Jaguar I-PACE SUV. However, it uses a smaller 40kWh battery and an electric motor with a maximum power of 220kW has to go to a place where the gearbox is currently being used (the final version is also 190kW). Differentials remain original. Instead, the battery is in those places where the engine was originally. It is said that the electric motor with a battery must weigh less than 300 kilograms and is therefore a bit lighter than the original E-Type gearbox. The weight distribution should not be changed long and the car should be controlled in the same way. If the owner requests it, Jaguar retains the original petrol engine and gearbox to restore the car to its original state. Acceleration from 0 to 100 km / h, the electric version should be one second faster than petrol, ie in 5.5 seconds. Instead of a spare wheel, the control electronics will move in and the charging port is where the gasoline is normal (at the rear). However, Jaguar is of the opinion that, taking into account the built-in charging infrastructure, it will take into account the charging port at the front. The electric E-Type must be 150-200 miles on a single charge, depending on the current conditions, Jaguar says the target is 170 miles (almost 275 km). In terms of charging, the Jaguar E-Type is not a ride for daily driving, so fast charging must be forgotten and a maximum load of 7 kW is supported. Charging the battery takes about 6-7 hours. The cost of reconstruction must be £ 60 thousand.