czechrepublic October 1, 2018 czechrepublic, Entertainment Comments Off on At the exhibition of Slovak art is the criminal alley and the Tatra mountain ridge 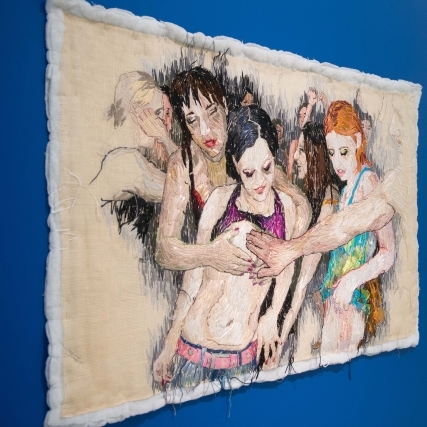 The imitation of a criminal aisle or a three-dimensional work representing the edge of the High Tatras is part of the new exhibition of contemporary Slovak art from the Regional Gallery in Liberec. There are 70 works by 48 authors. According to curator of the gallery of Zuzana Štěpanovičová, the exhibition was founded after 1993. The exhibition commemorates the centenary of Czechoslovakia.

"It is an implementation of the Slovak art scene on the basis of individual personalities and we have chosen to give them an important chapter in the development of Slovak art," Štěpanovičová said.

The works for the exhibition, which will last until January 6 of the following year, were lent to the Slovakian city gallery of Bratislava. "We have never seen them so exposed," said the Slovak gallery director Ivan Jančár. The works are located in three rooms of the Liberec Gallery. The exhibition covers all directions, branches and generations of contemporary Slovak art. "There are different types of paintings, sculptures, objects, video art, both classical and experimental graphic forms," ​​says Zsofia Kiss-Szeman, the chief curator of the Slovakian gallery.

The exhibition was organized by the Liberec Gallery within the 100-year jubilee of Czechoslovakia. "We did not want to remember nostalgically for the year 1918, we wanted to show it new." Since the distribution of Czechoslovakia, we have not had many opportunities to learn Slovak art culture, "said director Jan Randacek of Liberec.

The human heart as one of the fractals

It is precisely the division of Czechoslovakia in 1993 that refers to the name of the exhibition Plus minus. "The distribution of the Republic gave us something, but it also lasted," said Kiss-Szeman. Plus minus is also the name of the objects of an important Slovak artist, who forms on the border of sculpture and new technologies Ashot Haas. Plus, Minus 21 is called the studio of Daniel Fischer, whose triptych is mentioned fractals is one of the dominant works of the exhibition. "It refers to the fractal structure of nature, not only the outer, but also the inner nature, one of the fractals is the human heart," said Štěpanovičová.

Three paintings by Fischer stand together with the large hall of the exhibition The main edge of the High Mountains by Štefan Papča a Through the aisle Ilony Németh, who made it from natural materials. "The use of electrical impulses creates an illusion of the situation that could happen," Štěpanovičová said. Sticks that symbolize the sticks are gradually bent downwards and are deliberately punished with the convicted wounds that run down the aisle. This punishment has been used primarily in the army in the past.