A court with an elite policeman in Pilsen: we felt threatened, he came to us, testified to the boss 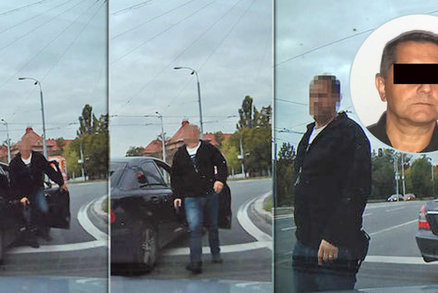 Josef N. was then led by a police officer of Merced and his deputy, the defendant Vladimir S. sat on the passenger seat. Prosecutor Jiri Richtr is accused of physically attacking the driver after he has flashed on his car because of the risky overtaking maneuver.

At the court in Pilsen, where an elite policeman is questioned about the attack of the driver, the superior of the accused testified. Zbynek Schnapka

"I saw the gray car when he pushed us out of the way in a torn place. This has been repeated several times. We suspected that he was under the influence of drugs. The driver ran from the left to the right lane for our car. We felt threatened. We launched a warning device and decided to stop the driver"Said witness Josef N.

He needed to know that we were police

"His colleague showed him a police ID from the driver's window. I heard him say he would stop at the gas station. But he did not. On the contrary, I had the impression of an acceleration. He had to know that we were police, except the emblem on the car, flashes of the footprint and the police. I drove ahead of him to stop him and my colleague got out of our car and went to the sups and went after him, "said Josef N.

He said in court that the way his subordinate asked the supercar to get out of the car was not right. "Yes, I have heard bad words, but he did not come into physical contact with the driver" added Joseph N., who governs martial arts and underwent a special police training in the US, and underwent an anti-terrorist course in Israel.

The elite policeman rejects the debt

The defendant elite policeman refuses the rank of Major Vladimir S. "I did not hurt him, I did not catch him on my tie. Yes, I told him bad words, I did not, I admit, " said in court Vladimir S.

The public prosecutor sees it differently. "Initially he did not prove himself as a policeman in word or service. The driver labeled the words "you, you went to him and asked him who he was," said prosecutor Jiří Richtr.

"When the driver immediately did not respond to the call to leave the vehicle, he physically attacked him. He hit him and hit his cell phone when he called. He grabbed him in his tie and tried to pull him out of the car, "he added Richtr.

What the driver said

"I did not think they were police. It was a black Mercedes with dark glasses, they were all in black, they had dark glasses and were powerful. When they blocked me, I locked myself in front of them in my car and opened the window. He took me in his tie and tried to take me out twice. I screamed for help. Only when the other man turned out to be a policeman did the situation calm down, "said the attacker Josef V. Policist Vladimir S. threatens to abuse an officer's authority to five years in prison.