Babis: YES will support a slowdown in wage growth for constitutional actors 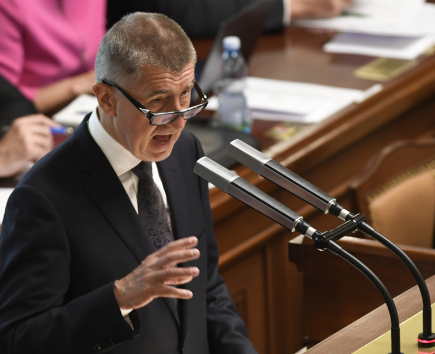 Prague – MEPs, according to the head of the movement and Prime Minister Andrej Babiš, should support the Pirates' proposal that the House should act alongside the raising of pensions and the delay of the growth of salaries of constitutional actors as a result of possible delay. Because it is not an extraordinary meeting but a meeting that is convened by the Chamber of Deputies, it is possible to place extra points on the agenda. Ivan Bartos, president of the Pirate, told journalists today that he would make a proposal to block the growth of politicians' salaries at the beginning of the meeting. The CSSD of the government rejects it.

The Pirates would have a total of 78 votes, with a total of 100 votes cast. The delay in salary increases is also supported by the Freedom and Direct Democracy movement. Babiš today told reporters about the meeting at the meeting that the support of the appointment of the point was requested by Jaroslav Faltýn, the head of the House of Commons ANO.

The Prime Minister said it was a proposal from the previous one-color government YES. "My government has suggested this because salaries do not grow so fast, we have inherited it, as a parliamentary club, we support it, and another salary increase is there," he said. He also warned that MPs would vote against each other by delaying their own wage growth. "Voting for their own income can be unusual for them, but it is," he said, assuming he would convince his club.

Bartos pointed out today that if the proposal was not adopted by the end of the year, the salaries of the so-called frozen politicians would automatically rise by 20 percent from January, which the Pirates do not consider correct. "We try to act like a good farmer and I think politicians should start together," he said. "When the debate between trade unions and the government (wage increases) is strong and politicians want to add about 20% in one year, that is the issue of arrogance," he added.

According to Bartos, many MPs are not interested in solving the problem, but are of the opinion that they can still discuss the proposal. "It is a big problem to solve this problem in one way or another, but I suppose, with the public debate going on, the politicians of other parties are catching up," he said.

Minister of the Interior and CSSD chairman Jan Hamacek said today that he does not want to adjust wages to politicians. "We should not reopen the endless debate and resolve the salaries of the members every year," he said. The current system, which is automatically linked to wages in the non-business sphere, is correct. "I think of other efforts as a step back and it will not do any good," he said.

To calculate the salaries of politicians, the basis on which they are based is crucial. For this year, the base was counted as 2.5 times the average wage in the non-business sphere, with an upward trend since 2015. Previously, the salaries of politicians were frozen and increased. The following year and in the following years the coefficient should be 2.75 in accordance with current legislation. The Ministry of Labor and Social Affairs has proposed to remain 2.5 this year.

The state would also save on the multi-faceted flat-rate compensation of politicians, who also deviate from wages, with the slower growth of the salaries of constitutional actors.