Behind the column of occupiers went with the inscription DUBČEK 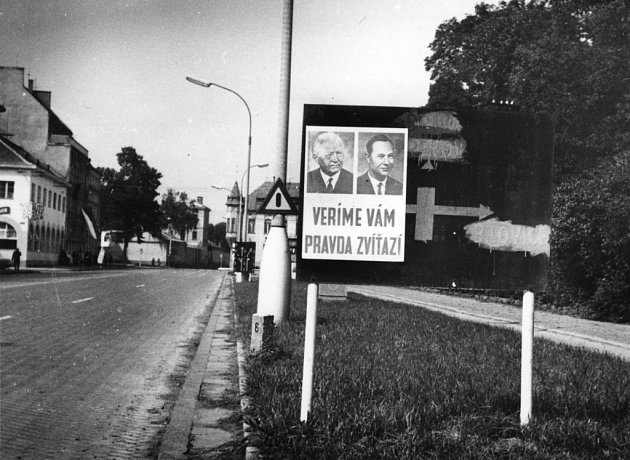 Necessary on August 21, 1968, it was five years ago that the 37-year-old Josef Jančář was the director of the Slovácko museum. At the age of fifty she recalls how she woke up in the morning of a woman who had just finished preparing for their holiday leave.

"With an excited voice, I was called to listen to the radio, send a weird game, and still asked so, it was clear to me that this is not a game and does not go on vacation," Uherskohradišťský says and tries to focus on experiences that have been laid down in the layer of five decades of the past.

SPECIAL: 50 years since the occupation of 1968. Read testimony from the Czech Republic and the world

He swallowed something quickly and went to the museum in anticipation of further development.

"Sometime before noon, a long column of the Russian army, Kunovice, approached, and upon his arrival in Hradiste a stream of military equipment broke down at a crossroads of Malinovská Street and Všehrdova Street in the square," explains Josef Jančář. that morning in August.

At that time, according to his words, a group of students from the School of Applied Arts appeared in the Slovak Museum.

50th anniversary of the August invasion

"They took six multiplex panels to prepare an exhibition and wrote each name on each panel called DUBEK, they formed a kind of crowd of people and went to the column.The residents started a square full of people, looking at a mixture of fear and resistance, after which the column returned to the intersection and headed for the old city ", says a 87-year-old witness.

In the city leaflets began to appear with protests and condemnation of the occupation, made in the gallery of the Slovácko museum and the district library.

"I also recall the military occupation of the Communist Party of the Communist Party, because I lived in Kolarova Street with my family, the tank and the soldiers in front of the house were visible from the bedroom, the disturbing feeling forced us to stay for several days. in the bedroom to sleep in the kitchen with windows across the street ", explains Josef Jančář.

And what was his next destiny?

"First of all, I was dismissed as director in 1969 and immediately released from the Slovakian museum with the idea of ​​finding a manual job.I found it in peace peacekeepers in Lipov, where an employee of the Czech Communist Party came to see how much I deserved, but that is another chapter ", Josef Jančář remarks.

PhDr. Josef Jančář, CSc was born on June 16, 1931 in Těšov, Uherský Brod. After the Second World War he was taught in a weaver in Moravolen Šumperk. After graduating he went to grammar school and later went to Brno to study ethnography at the Faculty of Philosophy at the Masaryk University in Brno. After graduating in 1958, he joined the Slovak museum in Uherské Hradiště.

Between 1961 and 1964 he worked in the newly established regional center, the Center for Folk Art Production. From 1964 to 1969 he was the director of the Slovak Museum. He then worked for 10 years at the Peace Defenders JZD in Lipov. In 1979 he was admitted to the Folk Art Institute in Strážnice (in the personal title of his director, PhD Slávka Volavý), where he worked until 1990 as an expert. He then became the director of this institution, which was transferred to the Ministry of Culture under the name of the National Institute of Folk Culture. Until 1997 he was in charge. His publishing activity is very rich. In the course of his life he published more than 200 studies and he wrote seven books in which he first worked on traditional crafts, building museums in nature, history of the field and contemporary folklore. His latest publication is Ethnography in Moravia and Silesia in the borders of the 20th century. Published in 2014.