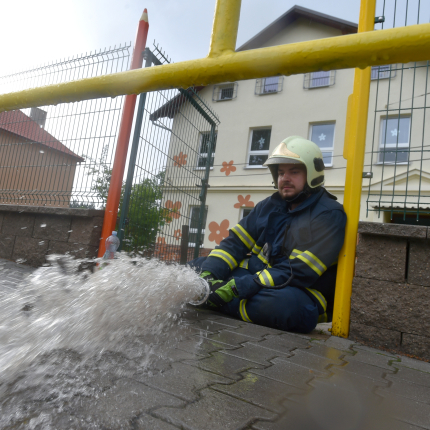 The fire service in the Zlín region spent the night of Sunday on the twisting of heavy rain showers. They traveled to two dozen events. Both professional and volunteer firefighters have pumped water, cleaned sewerage and road communication, said Roman Žemlička, spokesperson for the firefighter.

"The damage caused by the rain is only material at the moment, injuries are not reported," says Žemlička.

The water has flooded several basements, and it also ended up in the buildings because of the reconstruction of the roof. In Zlin's hospice it was because of a blocked pipeline. Firefighters also had to deal with the mud on the road or the water in the tunnel under the rail.

After midnight the firefighters went to six events, for example in Březnice u Zlína the water was brought to kindergarten, in Bílovice in Uherskohradišťsku there were deposits of mud on the road, in Bystřice pod Hostýnem in the Kroměříž region a riverbed hid under the bridge .

This morning it is no longer raining in the region, the weather forecast of meteorologists should be cloudy today, sometimes temporarily and partly cloudy. The rain should only appear every now and then, but in the evenings there may be storms again.