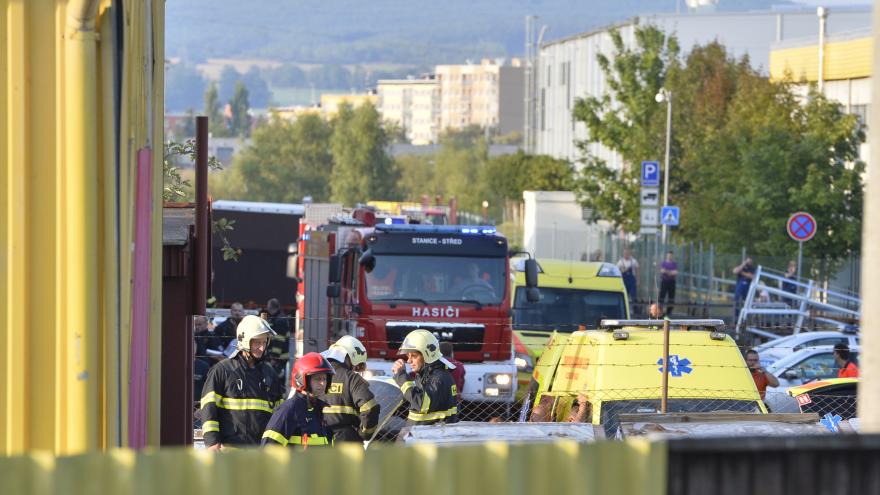 The helicopter collapsed in the production hall of the thermal galvanizing plant in Domažlická street in the industrial zone of the Borská pile. The rescue workers sent all available crews there and the rescue helicopter flew, but he flew without patients. Fire and police were also on their way to the site. The helicopter stuck to the construction of the hall.

"According to the first information from the witnesses to the accident, the helicopter first flew slowly over another production hall, where it almost stopped, and then stumbled on the flight before it collapsed in the zinc factory's hall," said Czech television news reporter.

"Unfortunately, two people suffered injuries that were incompatible with life and died there." The lives of two other crew members still fought, but despite all the efforts of the rescue teams, there was no restoration of life functions and the doctor had to do so.
Declare dead, "said Martin Brejcha, spokesperson for the rescue service.

According to police spokesman Dana Ladman, the victims were crew members of the helicopter. No one was injured in the company premises, but there was probably no one in the hall at the time of the crash.

"It is a smaller hall of about 25 times 15 meters high, about five meters high, it was completely empty", said Petr Poncar, spokesman for a firefighter. In the evening there was a dron that searched the hall.

The helicopter also leaked operating fluids, but the leak was not that great. "No fire has arisen or arisen," said the fire brigade. The building was also inspected by a static, according to his statement that the construction was not destroyed. "Firefighters, in agreement with the Air Accident Investigation Institute, will stabilize the building and then rescue the helicopter," added Poncar.

According Pilsen, spokesman for the police, Pilsen entrepreneur, whose company produces aircraft components, should have been informed about the helicopter.

The same type of helicopter collapsed two years ago

According to the manager of the external relations, the medical emergency service of Vítězslav Sladký, a private helicopter Robinson R 44 collapsed. "According to witnesses the helicopter flew over the terrain, did not succeed in the maneuver, jump back and fell," he said.

A machine of the same type Robinson R 44 Raven collapsed on Plas in the region in August 2016. Two men, an instructor and a pilot at the age of 55 and 43 died there. The pilot rehearsed with the engine failure landing instructor, the so-called autorotation. The instructor flew over 6,000 hours over helicopters, the pilot more than 54 hours. One of the crew members was the former pilot of the air force. According to the final report, the accident caused a pilot error series in the autorotation training.