Large forest fire in the Pilsen region is extinguished, firefighters can leave 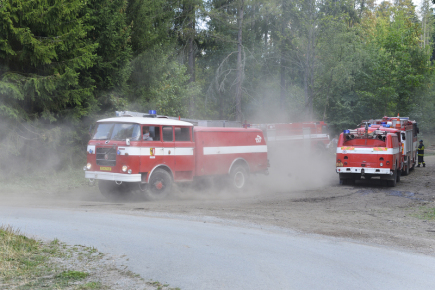 Pňovany (Plzeňsko) – The forest fire in the Pilsen region, which started on Tuesday before 2 p.m., has already been completely extinguished. All firefighters returned to the base. The forest owner must supervise 72 hours. ČTK said regional spokesman Petr Poncar. The cause of the largest forest fire this year in the Pilsen region is not yet known. On Tuesday afternoon there were 32 units, that is, up to 130 firefighters, of which 50 were half. Nobody was injured.

"The interference was ended, everything was extinguished and spilled with water, and the site was handed over to the owner, who only needs 72-hour monitoring and his tank for the Pnovan unit," Poncar said. All units gradually switch to their base, he added.

Three separate outbreaks have monitored more than 60 firefighters today. Sometimes the fire flashed again. According to Poncara, it was purely a fire that spread under a surface that was not visible. "The units used a humidifier to sink the water better in depth, which increased the efficiency of firefighting," said the spokesman. The firemen in the afternoon inspected the fire and the thermal camera visually.

"The cause is still to investigate the police with our investigators," he said. The damage has not yet been determined. The representative of the forest owner estimated the affected area between Pňovany in Pilsen and Stříbro in Tachov more than ten hectares and damage to more than one million crowns.

Firefighters have announced the highest, fourth warning level on Tuesday. The outbreak had a police helicopter with a water bag and a flight service for firefighting. The fire ran from the forest past the station in Pnovany to Stříbro. Due to air strikes, electric traction on the main line from Pilsen to Cheb and Germany was switched off for about six hours on Tuesday afternoon. Buses ran between Stříbro and Pilsen. Burned fir. It was not a so-called crown fire, but grounded to 30 centimeters, so it burned the wheelbarrow and bush.