"Let's bring it together." Drahos has launched a campaign for the Senate 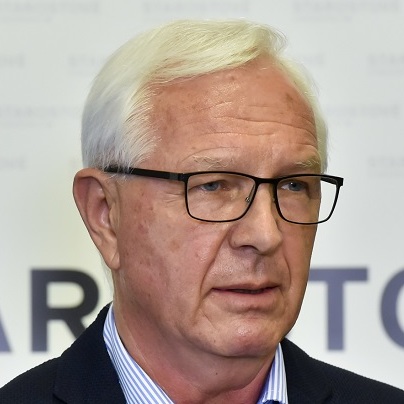 With about three dozen volunteers and with representatives from TOP 09, mayors and independents, Greens and KDU-ČSL, the former president of the Academy of Sciences, Jiří Drahoš, launched a campaign in the Jezeretheater for the Senate elections in Prague 4.

"Let's merge it" – I would welcome Drahos.

Otherwise a good senator would obviously be a man with experience, insight, humor, who fluently controls a number of European languages. This is Benjamin Kuras in Prague 4. From his recent interview to the current anniversary of the Soviet occupation, I have chosen:

I worked for only a few months on the English editorial staff of Czech Radio in Prague, but the invasion caught me on holiday in Olomouc. Several times with my friends like Pavel Dostal he entered the national radio network of the Olomouc radio studio, and from us the counter-revolutionaries liberated a few tankers in leather helmets and ended our counter-revolution. Nothing dramatic was going on in Olomouc, the occupation was postponed for three days, we did not understand why until it finally became clear that they wanted to establish a strategic crew of thirty thousand soldiers and avoid dramatic conflicts with the population. The crew was there when I looked back in 1990.
At the contemporary photo exhibition in Prague, which contains all sorts of passwords of the occupation, I remembered one, written with classical Haná humor, exposed to the bench, before there were two tanks:
"To view our bank
there may not be Russian tanks.
We do it in what we have in it,
we look at ourselves. "

The best is of course Kuras, but unfortunately many people do not know that. For years, consistent EU views on migration and, in particular, personal experiences with Islam in the United Kingdom today are what we need.

I hope this meat burns again, it's just a regret

So Jabkaov Jirka turned into an almost indigenous prague in a game and wants to compose without knowing what and how. Golden Babis, who leads such scientific geniuses, must even shine if he does not want to.

Better dachshund than so ?? migrating welter.

"to support everyone who opposes evil, opposes injustice and hinders further destruction of our freedom,"

You laugh at your own stupidity.

Pad Drahoš has to take care of what he can control, and not climb where the ball does and the terrible money is used, and they bring nothing to our people.

the fool understood nothing

we do not want.

I hope that Syk will overwhelm this Upland Udder, and once and for all it will be a peace for the politics of a totally useless supporter.

So I will reapply my voice prof.dr. Drahos, then the communist and native s.vini (those the heavily sick people robots) Sykes.

You are hollow like an empty drum of a poor man