In the Lochkov tunnel, a road accident took place after an hour in the afternoon in the direction of D1 to D5. Two trucks and a passenger car crashed here. The site was uncomfortable for about one and a half hours, after 14:30 the runway was taken into use, now the place is already completely open. "In the Cholupicki tunnel, traffic is regulated by transport facilities. From the Radotín bridge, the police officers lead the traffic to the street Strakonická, "he inquired about the event on Twitter from the police of the Czech Republic.

"Firefighters of three units hit the Lochkov tunnel in a truck accident and a passenger car at the tunnel wall. Firefighters rescue the wounded and cause an accident against the fire ", said Martin Kavka, a spokesperson for the fire brigade of the capital city of Prague. 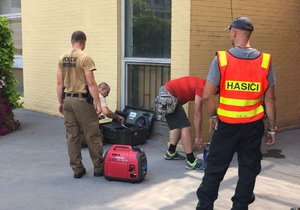 Lighting was not easy for firefighters. The passengers were locked in a side-turned vehicle. "Two people were saved and transferred to the rescuers"Added Kavka The helicopter flew to help the medical staff.

Trinity fire brigades reach the D0 motorway in the Lochkov tunnel in the direction of D5 in the case of a truck accident and a passenger car at the tunnel wall. Firefighters rescue injured people and provide a fire accident.