Marking that limits the traffic of cyclists in the center of Prague costs more than a quarter of a million. So far it is useless 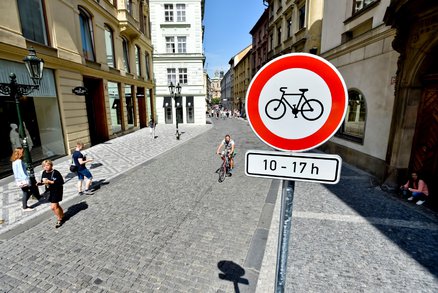 More than a quarter of a million crowns – so much traffic signing, which was installed by TSK at the request of Prague 1 in the center in July. "This is the whole project, including yellow marking and marking of cycle routes, it was in 13 places and perhaps in hundreds of places, there were roundabouts, horizontal traffic signs," TSK spokesperson Barbora Lišková told News.cz the list of actions included with the amount.

Brand new brands had to restrict the passage of cyclists between pedestrian zones between 10:00 and 17:00, the restrictions on the lower part of Wenceslas Square and areas around the Old Town Square and Republiky Square. 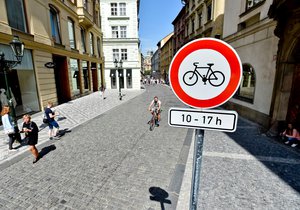 However, the work is now coming to an end – on 1 August, the city judge confirmed the Auto * Mat Association, which has been fighting cyclists' rights for a long time, and annulled the restriction, whereby the City Hall took a more precise measure, for example limiting the speed of cyclists. "Prague 1 respects the court's decision, but disagrees with the argument, he believes rthe decision of the court maintained the rights of cyclists for pedestrian rights in pedestrian zones"Said spokeswoman Veronika Blazkova, adding that the city still considers the safety of pedestrians in the city center, who justify the restrictions, to be a crucial question, and only a speed limit would not be enforceable.

The cassation complaint of the town hall against the decision to serve will not. It is now up to the Auto * Mat to find a compromise that suits everyone. The possibility is to create a cycle path on the Square of the Republic and to limit the area around the astronomical clock of the old city. That is why the newly placed markings must either be completely eliminated or at least adjusted, which can increase costs by a further thousand crowns.

By the end of the month, the TSK will ban the ban from 10 am to 5 pm in pedestrian zones in the center of Prague.