MoLSA proposal: the minimum wage must correspond to half of the average wage 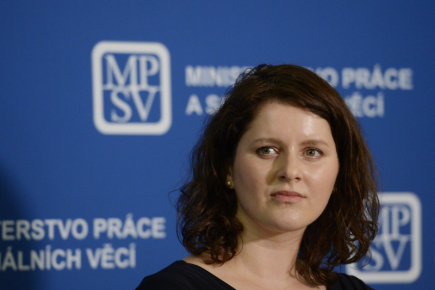 Prague – The minimum wage in the Czech Republic could rise from 2020 to half the average salary from January to January. This valorisation mechanism is proposed by the Ministry of Labor in the amendment of the labor law. Journalists said today, after meeting with the leaders of the Czech-Moravian Confederation of Trade Unions (ČMKOS), Minister of Labor Jan Malacova (CSSD). Trade unions agree with the proposal. The intention to get the lowest profit up to 40 percent of the average is not enough. Malacca is of the opinion that the government's talks with the trade unions for wage growth in the public sector will take place towards the end of August. The deadline is not yet.

"We need to achieve this goal gradually: 50 percent of the average wage, it's a question of negotiation and economic development, we have to aim at at least 16,000 and see how the average wage will develop," said Malacova.

The January minimum wage is 12,200 crowns. Trade unions are expected to grow next year by 1,500 CZK, or 12 percent. According to employers this does not correspond to economic growth and for companies in some sectors such high added value would be a problem. They propose an increase of 800 CZK. Malačová as Minister of Labor supports the request of the trade union.

The government of Andrei Babis (ANO) in the program description states that it will draw up binding rules for the predictable growth of the minimum wage. The previous cabinet of Bohuslav Sobotka (CSSD) has determined that the lowest income will be 40 percent of the average wage. Last year it was 29,504 crowns. If next year according to the proposed valorisation rules would be added, people with the lowest income since January earn about CZK 14.750. In fact, it will be between 13,000 and 13,700 crowns.

Trade unions are upgrading the upward model. However, they want to reach an agreement with the employers and the government about the tripartite. "This agreement would then go to the Chamber of Deputies … Whether the 50- or 48-percent valorisation mechanism will be, or if we reach 50 percent in six or seven years, the question is how the deal will look," said ČMKOS President Josef Středula told reporters.

According to him, the problem now is to keep the ratio of 40 percent of the average wage. However, the proportion of two-fifths is not acceptable for trade unions, Středla added.

Employers have long argued for a clear formula for wage growth and the added amount can be predicted. Bound to average earnings. The head of the Confederation of Employers and Entrepreneurs & # 39; Unions, Jan Wiesner, said earlier that he would have a share of up to 40 percent of the average wage.

Minister of Labor Jana Maláčová (CSSD) is of the opinion that the government's discussions with the trade unions for wage growth in the public sector and the agreement will be completed by the end of the month. There was no deadline yet. Malacova told journalists today after negotiations with the leaders of the Czech-Moravian Confederation of Trade Unions (ČMKOS). The head office is asking for an increase of the tariffs by ten percent. The government proposes to raise wages by six percent and to increase by ten percent for teachers only, while others graduate less. On Friday medical unions went against the wages.

"At this point we all have to sit down for a negotiating table and make a deal, and I hope we can do this by the end of August," said the minister. She added that a specific term is not yet.

Prime Minister Andrej Babiš (ANO) said earlier that he knows the demands of trade unions and does not need to meet again. On Friday, he described the process of health associations as threatening and said he was unwilling to meet his representatives.

"The current recordings from one side or the other must lead to one single – to sit down and agree, and I am convinced that we can agree on a single meeting," said ČMKOS director Josef Středula. According to him, the trade unions wanted to avoid this situation, so in mid-March the government asked for discussions about increasing the revenue from public services. The head of the headquarters did not rule out that if the cabinet did not work with the unions, other unions could join the strike of the health union.

The trade unionists complained that the government was not in government and in mid-June they threatened protests. The first round of negotiations took place on June 19 and another in July. Ministers and leaders agreed to reunite in early August and an agreement to add could be in the middle of the month.

The government does not count towards the addition. Teachers would increase the percentage by ten percent, a low-income salary by seven percent, civil servants by six percent, four or five percent health care professionals, and two percent by police and soldiers. The Social Democrats of the government said that their ministers would push the cabinet to bring the resulting increase as close as possible to the trade union demand.