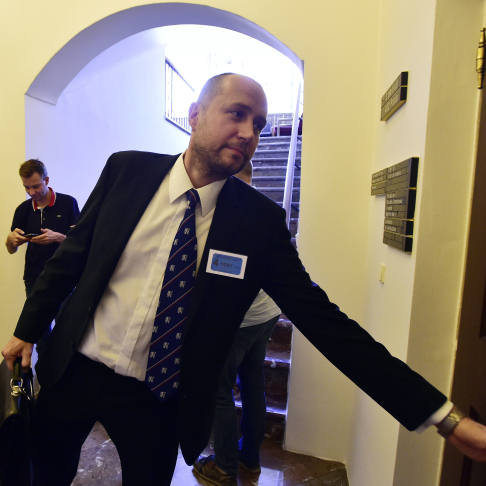 The appointment of Radim Dragoun as head of the General Inspectorate of Security Corps (GIBS) on Wednesday was discussed by the Security Council, which is a condition for his appointment. On the recommendation of the jury, the cabinet appointed the current head of the district prosecutor's office in Louny. He will be replaced by Michal Murin, who resigned from the GIBS leadership in early May following a dispute with Prime Minister Andrei Babiš (ANO). Opposition MPs do not find the selection procedure transparent. They criticized the fact that they did not even know the names of the 12 parties with regard to privacy.

Dragoun must be named early next month. "If everything can be discussed, it would probably be the date of September 1," he said with reference to an interview with Babis. The director of GIBS is appointed and removed by the Prime Minister, to whom the inspector is responsible under the inspection law. Appointment of the Director can be made by the Prime Minister on a proposal from the Government and after discussion in the Security Committee of the Chamber of Deputies.

Forty-year-old Dragoun presented his CV and vision on work at the beginning of the meeting. "If I were to become a director, I would think about the structure and leadership of the office," he said. According to him, for example, consideration should be given to whether it is necessary for the inspections to have all the technical and specialized work places when the police can use them.

Dragoun wants to improve the training of inspectors

Dragoun & # 39; s Inspector of Inspection must often communicate with senior executives. The applicant also wants to tackle the workload of individual workplaces and will also focus on the internal inspection bodies of the inspection. It intends to improve the training of inspectors. "I think it would be worthwhile to participate in the cooperation with the Judicial Academy, which has a very complex impact on the training of prosecutors, and I think it would not be a problem for the leaders and experts of the General Inspection to participate in this training, "said Dragoun.

Dragoun tries to establish relationships with government officials who have criticized GIBS in the past. It also wants to establish closer cooperation with the Czech police. "I would like the services to work together so that inspectors are not worried about decent police officers, but only those who commit crimes," added Dragoun. On the question of the deputy Pavel Zacek (ODS) he said that he would not influence the criminal cases of Prime Minister Babis. "I will not influence the cause of anyone," he said.

Babis refused to manipulate the commission

The student at the committee meeting recalled the circumstances under which the previous head of GIBS Murín. He asked to leave for citizens after Babis' disputes. According to the inspection, Babis repeatedly urged Murin to take the lead. During the Murino meetings he said that if the head office was to leave at the end of February, it would be "without scandal". Babis denied it, but Murine publicly criticized him and began disciplinary proceedings.

Babis, who participated in only the first part of the session of the committee, refused to interfere in the selection of committee members or to influence who recommended the GIBS commission. "I do not know the names, I do not," he said. The composition of the committee was presented by government officials. The prime minister insisted that the GIBS chief's election was conducted transparently for the first time, according to former director of interior design, Ivan Langer (ODS) and Deputy Prime Minister Bohuslav Sobotka (CSSD). ODS deputy chairman Jana Černochová said that she considered the tender as non-transparent after the cabinet of the government demanded the concepts submitted by the bidders.

In the near future, Dragoun wants to request a higher level of security clearance, now available for confidential release. The new function requires a deepening to the secret. At the beginning of September, he attended the meeting of the GIBS Senate Committee, which was briefly presented on Wednesday.