PHOTO: the viaduct of Negrelli records the bad state of the bridges: 16 they have to land 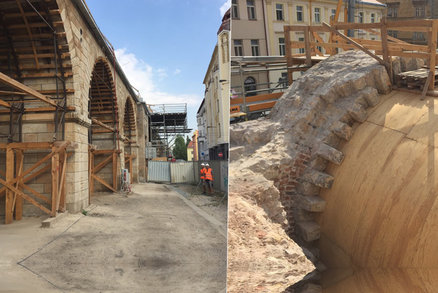 The old backbone of rail transport in Prague is becoming old-fashioned. The repair of the Negrelli viaduct from 1850 moved to the next phase. The first builder have cleaned the existing surface, removed the gravel around the track and then removed the old mortar layer. The exposed foundations were then revised.

"We have checked the arches stone over stone. Each of us then has a number, because it has its place and it is decided to stay,"Jiri Svoboda, director general of the Railway Infrastructure Administration, said the guided tours, according to Martin Ředina of the Hochtief Building Company, which together with the repair companies of Strabag and Avers unrelenting reality.

The construction has been delayed

"Stones of arches they were not as we supposed. So we had to add more new material, "Roman said, and the construction of the new viaduct does not even help the degraded logistics:"We build in the center and it is sometimes a problem to bring the material here"Explains Martin.

Unique representation of the ongoing repair of the Negrelli viaduct.

16 arch arches must be drawn and completely rebuilt, not only can faulty stones be replaced. The other six pillars are waiting for their verdict. Because of this careful inspection and logistics, the building was built by Mary will remember about a quarter of an hour, should be ready in April 2020.

According to the railway men's plan, they are redeveloping all 99 original bridges. Two bridge structures between the streets of the First Regiment and Křižík are completely replaced. At the same time, the reconstruction will unite all parts that had a different design or shape. In addition, the builders will completely replace the railway superstructure, including the technological parts and the restoration of the foundations. Reconstruction should reduce the noise of passing trains by recording anti-vibration mats.

According to reports from the rail, repairs are about a third. Now it will work closer to the Vltava river, between the Bubene dike and Stvanica. The pillars in the river were in good condition. According to Jiri Svoboda, architects were counted with plenty of water in the mid-nineteenth century.

The viaduct was opened on June 1, 1850 and was part of the construction up to 3000 employees. Trains crossed over, the bridge to the present connects both banks of the Vltava River. The interesting thing is that in his arches were former workshops or garagesbut they did not survive.

Unique representation of the ongoing repair of the Negrelli viaduct. Jiří Marek

The current reconstruction for 1.4 billion crowns has the space to rebuild under arches. They can find their place here shops, galleries or cafes. The actual reconstruction of the viaduct will on the one hand ensure extension of life and on the other side acceleration of train lines. Trains would run at a speed of 60 kilometers per hour.

Unique representation of the ongoing repair of the Negrelli viaduct.