Renovation of the castle of Maršov will be determined by the approach of the owner, say the conservationists 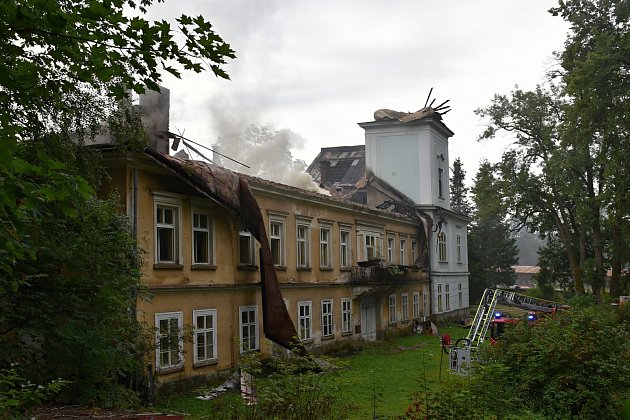 Horní Maršov – After a massive fire of an unused baroque castle in Horní Maršov, representatives of the National Monument Institute will focus on documenting the state of the object and determining the extent of the damage to the monumental values. A number of historical elements must be retained. Eva Macková from the National Heritage Institute, the territorial expert bureau in Josefov said.

The castle in Horni Marsov became a cultural monument in 1964. Recently it was in the offer of a real estate agency, which offered him 14.5 million kroner. The owner of the castle is a limited liability company of Sagna, a citizen of Russian nationality, Sergey Mayzus, who conducts business in the Czech Republic and abroad in the field of financial investments, stock markets, real estate and weapons and brewing.

HISTORICAL ELEMENTS ARE NOT MADE
The researchers have provided several tracks on the spot, which will be transferred to the laboratory of the Institute for Population Protection in Bohdaneč Spa, where they will be subjected to chemical expertise. Damage was estimated at more than five million crowns. The fire department investigator has ruled out the fact that the cause of the fire could be a technical mistake. In the most likely version, he identified intentional behavior or negligent behavior. The fire had extinguished about 80 firefighters from eight units.

"The National Monument Institute will ensure that work is done as quickly as possible to prevent damaged buildings from being leaked and before unauthorized entry," said Eva Macková.

"Although there was a very strong damage to the castle, when the fire destroyed all roofs and parts of the ceilings, it is clear that the historic masonry, facades and probably some interior equipment will be preserved and will form the basis for the desired and necessary renovation of the castle. " . "The basic condition for the successful rescue of the castle in Horni Maršov is now an active approach of the owner for the rapid resolution of the situation, especially the reconstruction of the roof covering, since in the mountain area the relatively early beginning of wet autumn and winter weather expected, in the long term it is crucial to find sufficient use, "she added.

ASYMMETRIC TOWER
In 1792 the castle Maršov was built in 1792 by the imperial chamberlain Jan Berthold Schaffgotsch in late Baroque style with elements of increasing classicism. The grandson of Berthold, Alfons Aichelburg, expanded the castle and rebuilt it in 1869 in a neo-Renaissance style. "With this construction an asymmetrical tower was built on the southwest corner.In the last major construction, the owners of the Czernin-Morzin family left the central staircase on the southern façade in the years 1906-1910.As part of the castle since 1940 used by the Hitlerjugend, "said the documentary from the National Monument Institute.

"In 1945 the castle was confiscated, the furniture was taken to the collection of the National Cultural Commission, later objects were added in the accessible state shelters, and in 1947 it received the local national committee for cultural needs. boarding school built in nature, which it used until the end of the 80's of the last century, "specified the history of the castle Maršov, Eva Macková.

The castle became a cultural monument in 1964. The village of Horní Maršov sold it to private hands in 1997. Usually it is offered for sale to those who are interested in different applications, but none of them has been implemented. In recent years, the lock was not only without use, but without basic maintenance. "However, the building condition of the castle remained relatively good, the building did not curve, window and door fillings fulfilled their function", she added.

COMPANY SUPPLIER
The owner of the building is the limited company Sagna, which is included in the trade register as the company's headquarters, just in the building of the castle Maršov. The owner is a Russian citizen Sergey Mayzus from Gurjevsko in the Kaliningrad region, who is also the executive, along with Victoria Štědronská. Sergey Mayzus is a partner or manager in several other companies, located in Cyprus, engaged in investments, stock trading, real estate, and weapons and brewing. In 1997 he received a bachelor's degree at the Baltic Fishing Fleet State Academy in Kaliningrad, Russia.