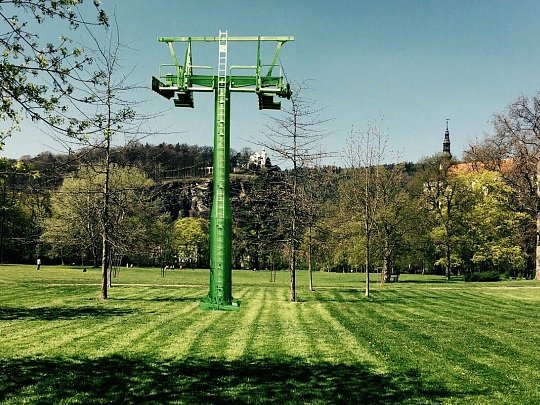 Destroy the unique green oasis in the middle of the city. It is a unique opportunity to attract other tourists to the city. Opinions on the construction of the cable car from the right bank of the Elbe to the Shepherd & # 39; s Wall vary. In Děčín it became one of the most important themes from before the elections.

Visualization of the elevator to the Shepherd & # 39; s Wall.photo: MM Děčín

The idea for the construction of the chair lift was revived by a group of Decin entrepreneurs. Some parties accepted it before the municipal elections. "People imagine it as a monster that is insensitive to the environment, something that would not be wanted by the Social Democrats.There are projects and visualisations that solve the funicular," says Arsenist Spasek, Deputy Social Democrat leader.

In his opinion, for example, it could be connected to the Shepherd's Wall in the center of the rope. According to the CSSD, the construction of the cable car would support tourism in the city and attract other tourists to Děčín. On the contrary, the connection between the two banks of the Labe through the cable car makes the choice for Děčín. "Mariánská louka is the most beautiful place in Děčín.

Every cable car needs a backpack or a parking space. And that would completely destroy this place. We think that the cable car is against the interests of the local population because it gives tourists priority ", Otto Chmelík rejected the election for Děčín, who is currently chairman of the Committee for Urban Planning. the Change for Decin, the joint candidate TOP 09 and KDU-ČSL, active on social networks.

The lower station is planned by supporters of the cable car at Mariánská Louka. But the laws do not allow such a construction. The meadow is a cultural monument and a protected archaeological site. This is the place where the original Děčín originated centuries ago. Among other things, a large part of his then inhabitants and the remains of the city are still underground. A similar situation is also on the Pasty & # 39; s Wall, where the upper station grows in the vicinity of the restaurant, another cultural monument.

But the idea is not new, as early as 2002 the cable car was built in the program of the then Union of Freedom. At that time, however, it was only an idea that was not worked out in more detail. The proponents of today are knowledgeable and have different visualizations. A working group was formed to assess the plan in advance and presented its vision on the ForArch fair in Prague. In reports that are broadcast by the media, they say that the cable car construction is supported by the city.

"The city has never discussed the construction of the cable car in the city administration, he was only aware of the proposal by Mr. Sukdol (one of the biggest promoters of the building – note red)." It is a question for future politicians. whether they will treat this proposal, "spokeswoman Marketa Lakomá said. How much a chairlift exactly costs is not clear. The initiators estimate the technology costs only at about 80 million crowns.