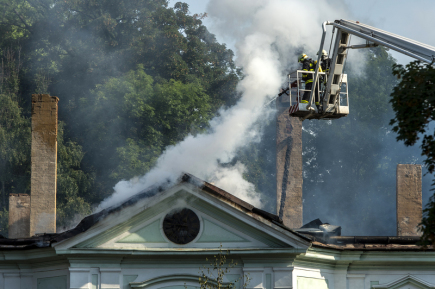 Horní Maršov (Trutnov) – The most likely cause of the fire on Sunday at the castle in Horni Maršov in Trutnov is deliberate ignorance or negligent behavior. The researchers of technical defaulters are today excluded from a fire investigation. CTK said Martina Götz, a spokesperson for firefighters. The police have begun investigating the case for presumably committing a violation of a foreign object. Damage to the castle is estimated at more than five million crowns.

Researchers completed the cold survey of the afternoon in the afternoon. "There were a few stops on the site, which will be transferred to the laboratory of the Institute for Population Protection in Bohdaneč Spa, where the tracks will be subject to chemical expertise," said the spokesperson. To investigate the causes of the fire, they also brought a dog who had been trained in the search for flame retardants.

The police confirmed that a technical failure was avoided as the cause of the fire. "We still work with the possibility of negligent or deliberate action," said Trutnov police spokeswoman Lukáš Vincenc. "The exact cause of the fire is still being investigated by Trutnov criminals in close collaboration with the firefighter investigator, and every perpetrator of the castle's infestation is threatened with a criminal charge of up to six years in prison. 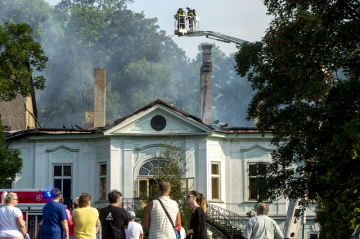 The fire of the original baroque castle destroyed all the roofs of the building, the tower of the castle and damaged the first floor of the castle. The fire service researcher estimated the damage to five million crowns. The castle, which is a cultural monument, was offered for sale at 14.5 million crowns, according to the website best-reality.cz. Since 1994, the castle has not been used in any way.

The main building of the castle was built in baroque style in 1792 and in 1869 three rear wings of the castle were added, creating a closed square courtyard. The block of about 2000 square meters of built area was changed several times. The main building was rebuilt between 1907 and 1910 and the tower with four floors was built. In the second half of the last century, the castle served as a school and a children's home.