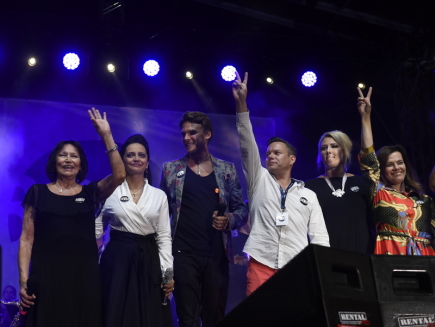 Prague – In a demonstration against the premiere of Andrei Babiš (ANO) and its ruling movement, the morning commemorating the Czech radio station was transformed into a memory of the victims of the invasion of troops of the Warsaw Pact in Czechoslovakia, of which 50 years have passed. Babiš spoke with a loud whistle that freedom in the Czech Republic is not compromised. Senate President Milan Štěch (CSSD) denounced attacks on public media and stressed the need for their protection. The August events of 1968 reminded the whole republic of many memorial events, exhibitions and concerts. The highlight of the memorial events was a concert on Wenceslas Square, which started after 8 pm.

Babiše for the Czech Republic hit several hundred people upon their arrival. Referring to his alleged cooperation with the Communist State Security, the chants, for example, chanted "esthetbak from", "shame" or "to go home". Disagreement was accompanied by the speech of the head of Chamber of Deputies Radka Vondráčka (ANO). The applause of the Confederation of political prisoners or the ODS and the KDU-ČSL was greeted with the applause of the wreaths. According to politicians of the opposition, people have been worried about the return of the Communists to power. The KSCM supported the Babiš government with YO and CSSD during the confidential vote.

The Prime Minister said that freedom in the Czech Republic is not jeopardized. Anyone can say what he wants, start a party or movement and criticize everything he wants, he said. Štěch, on the other hand, talked about the threat of the company through an abundance of information. In August 1968 he illustrated the key role of public media for the objective information of citizens. Attempts to discredit Czech television, Czech radio and Czech news agency are unacceptable, he said. Vondráček complained that people joked with a demonstration.

Štěchův speech was overwhelmed by social networks in the afternoon. Speaker of President Milos Zeman, Jiri Ovaccek, said on twitter that the people silent at the president of the Senate & # 39; silent & # 39 ;. Steve responded to the facebook that Ovčáček is a bastard and deaf. "Writing that people have heard my speech silently just confirms that," he said. Ovčáček, in another statement on the twitter, wrote that the people at the radio cheered the standardization communist who agreed with the occupation.

Some of the banners also criticized President Milos Zeman, among other things not to comment on the birthday decision. On the other hand, the Slovak president Andrej Kiska prepares his speech, and his speech is even broadcast by CT in the evening.

The Slovak Prime Minister Peter Pellegrini said in a commentary to Hospodárske Noviny that the events of August 1968 are a dramatic story about the hope of a small nation to stand up against the rules of the geopolitical division of the world and to to create a free and social society built on the dignified life of the individual. In the afternoon, in a speech at the opening of the exhibition with photographs of habitation, he said that people in Czechoslovakia experienced a feeling of helplessness and fear during the fateful night.

According to politicians of the opposition, people have been shocked by the return of communists to power. People & # 39; s Vice-President Daniel Herman said the government with the Communists is unfortunate. His party colleague, Jan Bartošek, said that he understood people's resistance. Vondráček, in response, stressed that the KSCM was not in government. The communists were, according to him, reasonably aware of allowing the establishment of the coalition cabinet of YES and CSSD.

Pirate and deputy speaker Vojtech Pikal told CTK that people wanted to show that they were angry with the chairman of the YO and Prime Minister Babis. Speaker of TOP 09, Miroslav Kalousek, who was not on the spot, said that when he reminds the "ex-estuaries" to the victims of the occupation, it is an insult to the victims. Chairman of the party, Jiří Pospíšil, told CTK that citizens have the right to give their opinion spontaneously.

The pirates of the wreath at the Czech radio did not lie before the end of the Piet. They wanted to separate that from what Pikal had described as unworthy. Representatives of TOP 09 also laid flowers until later to separate themselves from the Babiš event.

The memories of the 50th anniversary of August 1968 came to a number of world newspapers, such as the front page of the New York Times (NYT), which states that for millions of Czechs and Slovaks the transition from hope to despair after the invasion of August "so fast if it was shocking ". The range of their views varies from the condemnation of Prague's repression as an attempt to build up socialism with a human face, to defend the fraternal aid that, according to RIA Novosti, has maintained peace for the next 20 years. .

The oppression of Prague's spring in August 1968 is evident throughout Europe today, according to the internationally respected Swiss daily newspaper Neue Zürcher Zeitung. After the motionlessness of the decade, according to the letter, instead of organic change, shock therapy followed, which brought polarization of society, injustice, corruption and distrust. This is used today by politicians in countries such as Poland and the Czech Republic, he added.

Foreign politicians reminded of the birthday of, for example, the President of the European Council, Donald Tusk, according to which the invasion has destroyed the Prague Spring, but has survived the desire for freedom and democracy and forms the core of what now connects Europe. The events of August 1968 were also recalled by Commission President Jean-Claude Juncker and Antonio Tajani, Head of the European Parliament.

Exhibitions, concerts, commemorations and reunions were held throughout the country. On the Wenceslas Square in Prague, the atmosphere of the 1968 concert was brought to light, starting at 8 pm. The victims of the occupation remembered people at a meeting at the monument of Jan Palach, where a symbolic torch is lit from 10 pm. In the Church of the Mother of God before Týn litoměřický bishop Jan Baxant served as the mass casualties of the occupation.

The role of the Soviet Marshal Ivan Konu before the invasion of the Warsaw Pact troops is today commemorated by a new plaque on his statue in Prague 6. The representatives of KSČM oppose the discovery that the text overwrites history. The Russian embassy also criticized the monument.

By placing flowers on a plaque in Klára in Prague, the politicians of the ODS, led by Petra Fiala, celebrated the victims of the occupation of the Warsaw Pact troops in August 1968. The board is in Klárova in memory of a student of CTU Marie Charousková, 1968, the occupying troops shot down.

Similar events took place in other Czech cities. Liberec reminded the victims of the occupation in the morning with a silence and put flowers. People at the monument formed by the tank belt with the names of the victims lit the candles. Liberec was the second worst hit city in Prague. The occupants left nine dead and 45 injured. The events of that day are documented by an exhibition of photos on the square in front of the town hall of Liberec, the atmosphere of that time reminds the tank. In the afternoon a memorable event is followed by a display of authentic recordings and a concert of the songs of Karel Kryl.

In the center of Ostrava, the year 1968 reminds the insiders of the message: "Holiday does not run in a tank" or "Only thieves walk at night". Volunteers are hung up at night on the walls of houses or public lighting pillars. Moreover, Edvard Benes Square has Soviet historical military technology and men in Soviet uniforms.

In Karlovy Vary the invasion recalled the procession of about fifty people. They also stopped for the general consulate of the Russian Federation, where there were short speeches and music by Karel Kryl.

Behind the church of St. Jacob in Brno at least 15 people met at least after 3 pm, others came in and the small square remained filled until late. The program was prepared by the Bolek Polívka Theater with the initiative of Together Brno. The event also had an overlap with the present, some participants were against the indirect share of Communists in power and against Prime Minister Andrei Babiš (ANO).

People can fold up the peaceful peace dove in the square, view a panel exhibition about totalitarianism or send Babiš with a critical message by the postcard organizers. In the former Czech television building, historical documentary films were shown, with banners hanging in the windows with YES inscriptions? and no! The building is no longer a television, it is in private hands. The speakers were hits from 1968 and 1969, such as Martha's Martha repertoire by Martha Kubišová or the War of the Syncope by Brno 61.

Online shipping to the 50th anniversary of the invasion: