The Fire of the castle in Maršov has firefighters under control, they cough inside 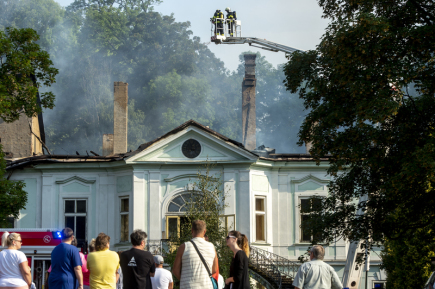 Horní Maršov (Trutnov) – In Horni Marsov in Trutnov this morning burned unused and dilapidated baroque lock. The fire brigade got under control after almost five hours. The fire destroyed the roofs of the castle and the castle. Two fire brigades suffered a slight injury after the intervention, after the treatment they returned to the fire. CTK said fireman spokesman Martina Götz.

The fire broke out this morning before 5:00. "Now firefighters are coughing in the building, breaking beams and slabs and controlling the fire," Götz said before 10 a.m. After the fire, firefighters sent 80 firefighters out of eight units and called out the third level of fire alarm.

Criminologists who, in cooperation with firefighters, would find the cause of the fire. "We are already discovering the findings of a fire and we are working with all versions", said the spokesperson for the Czech regional police, Jan Čížkovský, against CTK. According to him there are, for example, technical defects, negligence and deliberate inflammation. Čížkovský pointed out that the investigation into the location of the fire, even with the help of a trained dog, will be possible for the forensics to do after the fire has cooled down.

The fire has the roofs of all four wings of destroyed the castle. "What is not built is gone, it only looks at the chimneys, the roof does not exist in the castle," said Mayor Pavel Mrázek. According to the CTK photographer, a dozen eyewitnesses came to see the fire on the site.

Life in the village was not limited by the mayor. The main road from Trutnov to Pec pod Snezkou, near the castle stands, was open. Drivers, however, have to drive slower because the firefighters have stretched the hoses to pump water from the Upy river over the road

The castle, which is a cultural monument, is on sale at 14.5 million crowns according to information from the website -reality.cz. "The building has not been used since April 1994 and its construction and technical condition has deteriorated," said the site. The castle has been for sale for many years

The main building of the castle was built in Baroque style in 1792, in 1869 the three rear wings of the castle were added, creating a closed square courtyard. The block of about 2000 square meters of built area was changed several times. The main building was rebuilt between 1907 and 1910 and a tower with four floors was built. In the second half of the last century, the castle served as a school and a children's home.