The leadership of the Senate remains five members, the supporters of the president are four

czechrepublic October 15, 2018 czechrepublic, Nation Comments Off on The leadership of the Senate remains five members, the supporters of the president are four 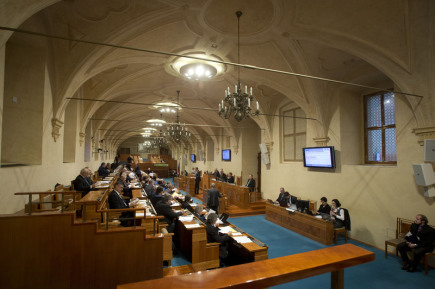 Prague – The Senate remains five members. They will be the President and the four Vice-Presidents, in accordance with the principle of proportionate representation. The representatives of the strongest senate parties – ODS, STAN and KDU-CSL – have reached agreement tonight in the Waldstein pub next to the Senate. Adepts for these functions may not be new in the upstairs room, they must be at least two years in it. The statements made by the politicians after the meeting also showed that the Senate would return more laws to the House that these parties disagree with.

"We are ready for the Senate to continue with four vice-presidents, our three parties agree and we have a majority in the Senate," said STAN chairman Petr Gazdík. The president of the Civic Democratic Party Petr Fiala confirmed the agreement on the structure of the Senate administration. "We also talked about the fact that the senate will respect the principle that there has always been Senate leadership, that is, the positions of the presidents and vice presidents, will be nominated by those who have had at least two years of Senatoric experience. "said the deputy chairman of the KDU -ČSL Marian Jurečka.

"We agree that we will not support changes to the constitution that would change the political system." We have agreed that the Senate will send all laws that increase bureaucracy, complicating life for people, back to the Chamber of Deputies. in the Chamber of Deputies, the semi-communist government, "said Fial." Our three parties have a majority in the Senate and we will not allow the Senate to implement laws that restrict the freedom of the citizens of this state, which leads to violations of democratic principles or changes that are not desirable and bureaucratic, "said Gazdík.

The successor of Milan Štěch (CSSD), the head of the Senate, could become one of the four candidates of the three most powerful factions. The ODS presents its Vice-President of the Senate and the current mayor of Teplice, Jaroslav Kuber, who is also asked by President Milos Zeman to lead the headquarters. Grae could become one of the vice presidents.

Because of the favor of Zeman Kuberou would have a problem with the mayors. Their supporters include the Chief of the Senate Committee on Regional Development Zbyněk Linhart, or the director of the gymnasium Jiří Růžička of the school committee. Lidové navrhují bývalého rektora Karlovy univerzity Václava Hampla, který je předsedou senátního evropského výboru. "I respect the principle that the strongest party will nominate his candidate, and then whether he will be elected," said KDU-CSL senator and independent Petr Šilar.

The president of the Senate suggests the strongest senate club, according to tradition. However, it is not yet clear how the number of members in individual clubs will stabilize, depending on who adds independent senators. According to the current state, the ODS should have 16 senators, as well as the mayors. KDU-ČSL can now count on a club with 15 members. The CSSD has 13 senators, YES Seven and the Liberal Democratic Party – Senator 21 six members. The Pirates Senator, Lukas Wagenknecht, has strengthened it.

Jan Horník, the president of the mayor's Senate, admitted that Senator Hampl could also be a candidate for president under certain circumstances, for example if all three strongest clubs had the same number of 17 senators. "If the equality of posts 17-17-17 were to happen, then I can imagine that he could be such a coherent element, he knows mainly European affairs, he is on the right and he is the rector of Charles University, and that must have a very different weight in the world than the president, for example, "he said.

However, it is not yet clear how the number of members in individual clubs will stabilize, depending on who adds independent senators. The newly elected senator of the Pirates Lukáš Wagenknecht decided to join Senator 21. Of the newly elected members, the rector of the Masaryk University in Brno Mikuláš Bek decided to cooperate with STAN. Others are waiting for negotiations with factions in the upper room. They are former presidential candidates of Pavel Fischer, Mark Hilser and Jiří Drahoš, former TOP 09 deputy Jitka Chalánek or independent Ladislav Faktor of the senator of České Budějovice. Representatives of the senate parties have agreed with the journalists that the negotiations with these senators will be continued.