The newborn weighs an average of 3.3 kg, with multiple births decreasing 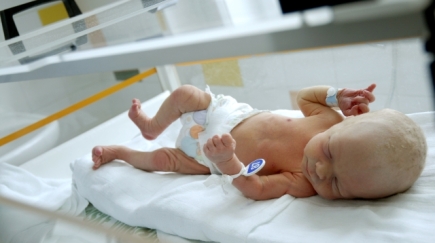 Prague – The average weight of the newborn in the Czech Republic last year was almost 3.3 kg, and this value has not changed significantly in the past ten years. Children weighing less than 2500 grams after birth were 7.5 percent and newborns with a birth weight of four and more pounds were nearly eight percent of all live births. The Czech Bureau of Statistics (CSO) today announced the press release.

The proportion of multiple births has dropped in the past ten years – 2.1 percent in 2007, compared to 1.4 percent last year. "In absolute figures, the number of births has decreased from 2320 to 1596," said the statisticians.

The average birth weight of the baby last year was exactly 3283 grams. "Children weighing 3,000 to 3,499 grams are most often born, accounting for almost 39 percent of all live births," said Roman Kurkin, from the Demographic Statistics Department at the Czech Office of Statistics, who weighs 3500 to 3 999 grams. Last year 505 children were born with an extremely low weight in one kilogram, before 11 years ago there were 430.

Boys are born slightly heavier than girls. Last year the average birth weight of the boys was 3349 grams, and the girls 3214 grams. An even lower birth weight has births of multiple births, with an average weight of 2250 grams.

The most common birth weight of newborns varies from 49 to 51 centimeters. Gender differences are low, according to statistics, while in boys the average height after birth is 49.8 centimeters and in girls 49 centimeters. Newborns from multiple births measure an average of 45 centimeters.

Children come to the world most often in the 39th and 40th week of pregnancy. More than half of the newborns were born last year in this interval. A shorter period of pregnancy lasted several weeks, on average 35 weeks, added the Czech Bureau of Statistics.

In the neonatology, the care for the immature and sick newborn, the Czech Republic belongs to the top of the world. Currently doctors can save children who did not have the chance to survive 20 years ago. Although the number of babies in the Republic continues to grow, through better care and concentration in the perinatal centers, they have a higher chance of living without complications, including children with an extremely low weight of less than 500 grams and born in the 22nd week.