The record humbled! A mountain carrier from Slovakia raised 165.5 kilos to Snezka 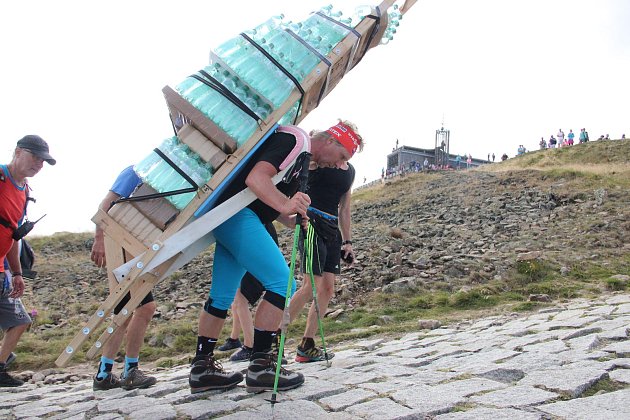 The Slovak sedate Vladimír Hižnay brought a record of 165.5 kilograms to the highest mountain in the Czech Republic. The extreme cost of the cargo, which exceeded the existing historical maximum, lasted only 2 hours and 29 minutes.

Hižnay traveled with an admirable smile. "I am totally cool," said the Slovakian fifty-five meters for the goal and all the way up. "With this performance I pay tribute to all those who worked like this, the mountains and the people.

I have absolutely not made the record for the good order, it is a respect for your mountains of the Giant Mountains and your people," said the humble Slovak.

But exceeded the historical record. Robert Hofer held the main prize in 1944 to bring a steel pipe of 160 kilos to Snezka

Vladimir Hiznay is for the first time in the Giant Mountains. The Tatra Carrier came with a weight from the Silesian Hut, with an extreme load, he was 200 meters high by a son and a mountain servant. At the same time he copied Hofer's two-kilometer route

The basis of the cargo balances

A difficult turn on uneven terrain, the Slovaks were very slow. After a few steps and frequent breaks and refreshments he almost halved the originally estimated production of four hours

The burden of Vladimir Hiznay was carried on his back. The wooden board had a fire hose on her shoulders. Krosna did not start on the route and equipped him with specially fixed "legs". Refreshments were carried by his son. "It's just clear water, nothing else is needed," he said.

On the Sněžka on Saturday three coachmen stood up. Milan Marhan from Prague was the first to take the eighth cargo. Another traditional carrier and participant in the Sherpa Cup Zdeněk Pácha from Baška near Frýdek Místek won a weight of 150 kilograms

"It is an incredible burden, try to take two bags of cement and make sure you get enough of it. is harder than three pounds, what Vlado is, it is superhuman, "said Zdeněk Pácha after his departure.

Krosna said he did not make it until Monday. He himself carried 20 bottles of mineral water after eight bottles. For more than ten kilos she had the wooden backpack itself. "And Vlado is still 16.5 kilograms more than I. Unbelievable Borec," he paid tribute to his Slovak colleague from Moravia

Twice a week in the Tatra

Vladimír Hižnay works at home as a bridge diagnosis. In the free time there are mountain tours twice a week. "It's a hobby, twice a week I go to the house Zbojnická in the Tatras, and I was there on Tuesday," he laughed.

Fatigue tried in vain. "Carrying mountain is about inner will, tenacity and endurance, if you are young, it does not cost much because these functions are lacking, it comes with time", says Vladimir Hižnay.

He says he weighs about 80 kilos. He earned his weight twice on Snezka

"As a courier cargo, he takes the bottled water off, if they do, at least there will be water here", said the owner of the Poštovna after Sněžce Milan Blaha, who took care of the recorders. "It's really an extreme proposition, it's important to put the center of gravity on special ladders before you start, and in such a heavy load the guys put him up for about two hours," he insisted on Blaha's performance , the organizer of the traditional races of the mountain carriers

At the summit of Sněžka athletes rose to the stormy applause of hundreds of people on a sunny afternoon.

Vladimir Hiznay has been a carrier for a long time. He made a personal record last October when he was 154 kg in the cottage Zámkovsky in the High Tatras, and he dropped 22 kilograms of the original cargo 400 meters for the target